Simple elegance makes for a daysailer that turns heads

The lady in red is always a standout at the party. In this case, the Rustler 24 daysailer I tested on a balmy fall day in Newport, Rhode Island, just happened to have a crimson red hull that gleamed when the sun shone upon it. A real head-turner, even in a sailing Mecca where beautiful boats abound, the David Boyd-designed Rustler 24 boasts an elegant sheer with finely tapered bow and luxurious overhangs. 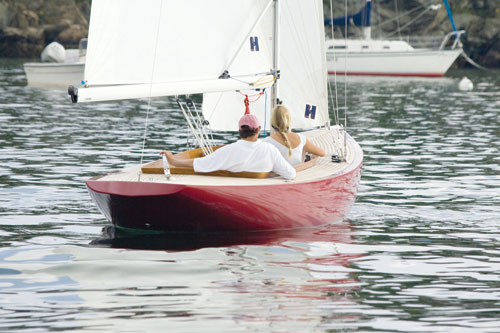 In a day when cutout transoms and bat-wing designs are all the rage, especially among racing daysailers, Rustler has joined the small group of manufacturers that have chosen to stick with traditional hull shapes. But don't get the impression that this boat is some kind of throwback to another age. There are plenty of surprises in store.

Leaving the dock is easy, even in dead air because the Rustler 24 is available with two options, an inboard two-cylinder 10-horsepower Nanni diesel with two-bladed prop or an electric-drive outboard.

The demo boat we tested had a customized stainless outboard engine bracket on the port side for the battery-operated motor. The bracket quickly attached with a couple of wing bolts and the outboard hung nicely over the side. Once out of the harbor, the lightweight engine was stowed along with the bracket on an aft storage shelf, the battery-pack ready for a recharge at home. If left affixed, the outboard bracket would have plowed the water surface and, obviously, marred the boat's good looks.

One of the first things you notice aboard the Rustler is the contoured, or "dished," cockpit seating that allows the helmsman to rest snuggly against the warm teak and reach the varnished tiller without the aid of an extension. It's pure comfort. You can also sit on the rail, if you'd rather, and still steer the boat. The tiller height is adjustable. 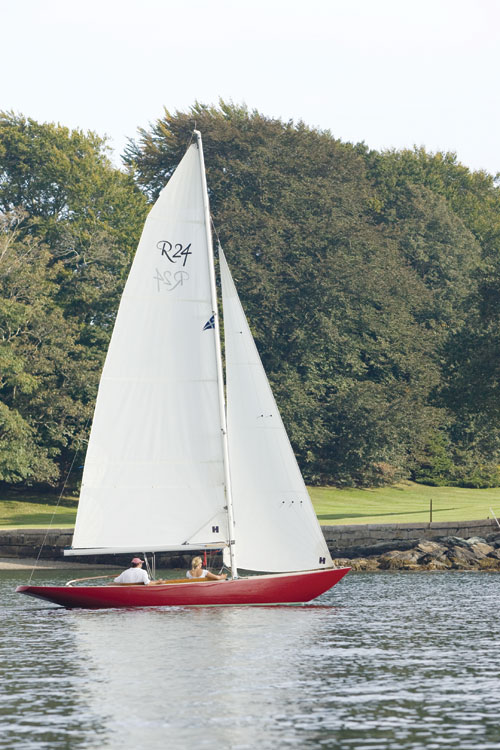 When scampering on deck, there's no need to worry about stubbing your bare feet on unforgiving hardware. The Rustler 24 has pop-up mooring cleats fore and aft, and the foreguy block is recessed into the deck. All the deck gear is made by Harken.

What you can see above the waterline is Boyd's flair for beauty and proportion, beginning with the overhangs that don't do much to make the boat go faster but certainly catch your eye. Boyd is the same nautical architect who in 1966 created the Piper 24 for one-design racing on the Clyde, and in many respects the Rustler is a rekindle. As columnist Bob Perry pointed out in a review of the Piper 24 in the February 2001 issue of this magazine, it looks great from any angle, and so does the Rustler.

Built in England by Rustler Yachts, this daysailer has loads of storage space for its modest size. There are two open pockets on either side the chainplates, and compartments with hatches forward and aft in the lazarette. 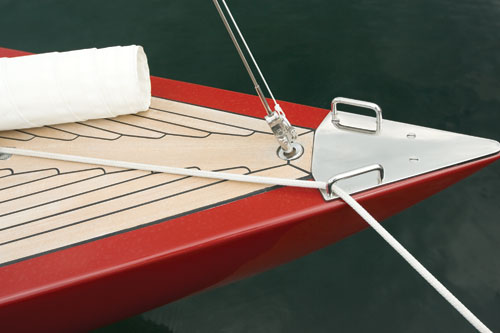 What you can't see from the dock are the trailerable boat's encapsulated-lead full keel and single-skin fiberglass subdeck, the latter covered by a 6-millimeter glued-laid teak overlay. The rudder, with stainless steel stock, is hung from the rear of the keel, unlike daysailers from days gone by.

The Rustler is relatively uncomplicated to sail, the rigging and sailplan straightforward. The Selden aluminum mast supports swept-back spreaders and wire standing rigging, which attaches to the hull with stainless chainplates. The backstay is Spectra and can be adjusted with a tug on the line peeking out at the helmsman from beneath the aft deck.

Getting her ready for a day on the water is simple, given that the Hyde Tri-Radial Dacron jib zips onto the forestay. At day's end, it's easy to tame the Hyde Tri-Radial Dacron full-batten mainsail using optional lazy jacks. Except for the continuous sheets, the rest is standard issue-color-coded jib, spinnaker and main halyards, cunningham, outhaul, furling lines and topping lift. The surprise comes at the Selden boom, a GNAV upside-down boom vang with 6-to-1 purchase. Under certain conditions, the vang's position can rub the mainsail, but mostly it's a welcome addition, given its low aspect to the deck.

On the day we sailed, the wind was puffing about 8 knots, and occasionally less. Despite the lack of a gusty breeze, the Rustler 24 wouldn't stand still. Given the weather, we didn't have to reef, but that task would have been made easier by the tack reefing hook. Had we shipped water in the deep cockpit, a built-in manual bilge pump awaited and the optional teak grate sole would have kept our feet dry. 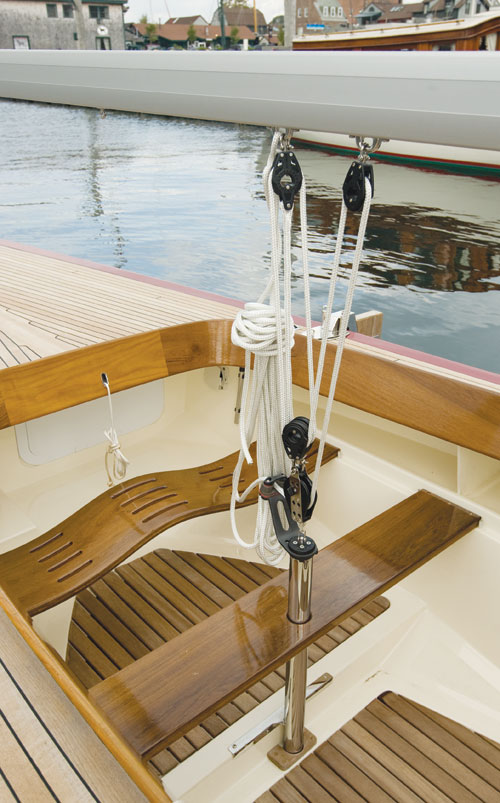 Skirting along Newport's rocky shores, we passed Harbour Court, the hilltop castle where the New York Yacht Club makes its summer home, and other majestic waterfront structures with expansive green lawns rolling down to the sea. The optional Tacktick speed and depth gauges let us know when we were pushing the envelope by trying to get a closer look, but tacking in the Rustler 24 can be accomplished so quickly it's as though the boat is spinning on its axis. That characteristic, coupled with the boat's inherent balance and ability to rapidly accelerate, left us a fat safety zone in which to maneuver.
Unlike some boats, the mainsheet pedestal with its 5-to-1 purchase is exactly where it should be-within reach of the helmsman but in the crew's way. That means you can easily singlehand, but chances are somebody will want to tag along.

The price from Scandinavian Yachts in Newport, Rhode Island, is $70,000 for new, or $90,000-plus for one with an inboard diesel. Twenty-five Rustler 24s have been sold since the boat's introduction and the company has orders through 2010.