By Robert H. Perry
Here is a very interesting design from Marc Lombard for the French company, Feeling. This is the first new boat I have seen from it in a few years. The promotional material says it could be a boat for “A circumnavigation in ultimate comfort.”
Schedule

This slick sportboat offers speed and handling with Kiwi flair

By Robert H. Perry
Sometimes I whine about the absence of design documents in the review packages I get these days.  I want to see what the designer drew. Leave it to my buddy Kevin Dibley in New Zealand to knock me out by sending me an almost complete set of plans for his exquisite new 21-foot trailerable sportboat.     Schedule

By Robert H. Perry
X-Yachts is introducing a third line of boats to complement  its Xp (performance) models and Xc (cruising) models. The range will be the X series and the first one will be the X6 followed by this X4 model at 41 feet LOA. I have been a fan of the X-Yachts models for many years. Its in-house design team does a great job with both styling and performance. The new X series will combine comfort and speed with the latest build technologies and exceptionally high-quality materials.Schedule

By Robert H. Perry
This new Oceanis model from Beneteau makes a very good contrast to the J112E. The biggest difference is that J/112E might be more appealing to the skipper inclined to do some racing while the Oc

This cutting-edge design will turn heads on racing circuits worldwide

By Robert H. Perry
The Melges 24 may not have been the first “sportboat” but it sure kicked the design of sportboats in the pants good and hard. The gloves came off. The new 40, designed by Botin Partners Naval Architecture, appears to be an extension of the same all or nothing approach to a 40-foot one-design sportboat. That’s a lot of sport.

By Robert H. Perry
Here is the latest J/Boats entry into the cruising boat field. I’m going to assume the design is a collaborative in-house effort like the other J/Boats. Many thanks to J/Boats for providing me with actual design drawings.  I have said this before in the reviews but the cruising boats that J/Boats has produced have always managed to echo my own thoughts on what the perfect cruising boat would be for me. They combine comfort, efficiency and style into a total design package that I find very appealing. It would work for me.

This folding trimaran should make for thrilling sailing

By Robert H. Perry
I can’t remember when I did not associate the name Chris White with offshore multihulls. Chris has always had his own approach and he has been successful with it. Chris is probably best k

By Robert H. Perry
To my eye, designer Pierre Delion designed the Explocat with comfort in mind. The D/L is 133 and that indicates a boat of “medium” displacement. But a warning here. The displacement listed i
« Prev 1234567891011 Next » 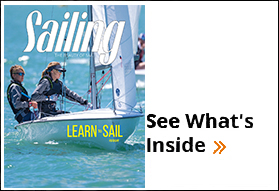