It’s hard to pinpoint exactly what drew me to a catboat, and specifically a Marshall 22. Perhaps it was some romantic notion conjured from gazing at an Edward Hopper or Winslow Homer painting, or maybe it was because these boats seem to exude a simple elegance.

The idea of sailing with a single sail was intriguing, as was the prospect of exploring shallow bays where a full-keel sloop certainly would run aground. I envisioned bringing the hull, which draws a mere 2 feet with the centerboard up, onto the soft sands of Cape Cod where we might spend the night sleeping under the stars on the 10-foot-wide deck.

But I set out to find a Marshall 22 in need of a retrofit. And no, I wasn’t in the market for a project boat requiring complete restoration and carpentry skills found only in legendary boatyards. 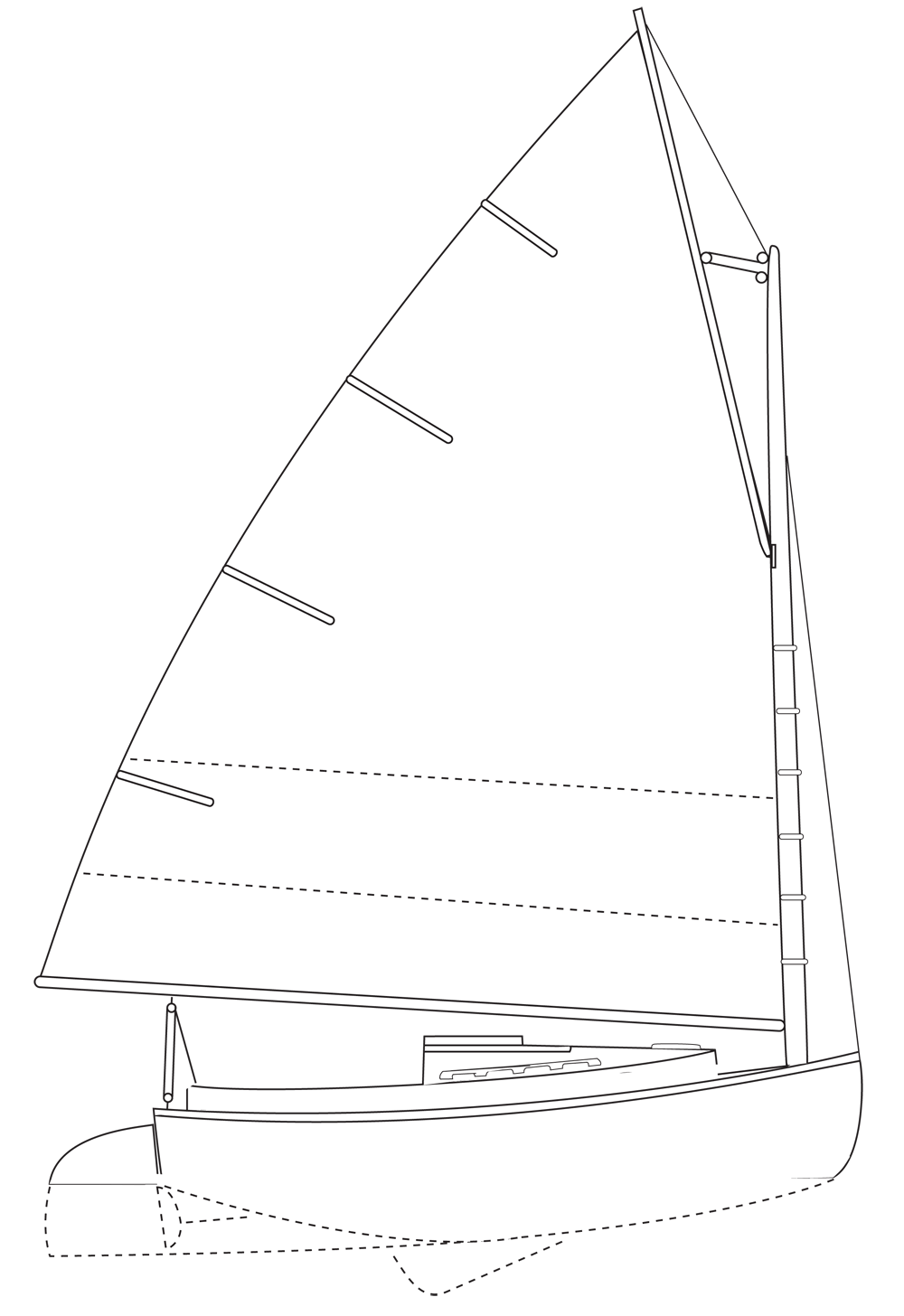 It helped to know a bit about the history of Marshall Marine and the late Breck Marshall, the designer and builder who founded the company in the early 1960s in New Boston, New Hampshire. Barely a year went by before Marshall pulled up stakes and moved to the present location on the waterfront in South Dartmouth, Massachusetts.

A large share of the company’s initial success can be attributed to his 18-foot Sanderling catboat which, when launched in 1962, was met with acclaim. That compact catboat paved the way for the M-22, a logical evolution introduced three years after the Sanderling. During the ensuing decade, the M-22 developed a strong following.

Although Marshall died unexpectedly in 1976, his son Geoff Marshall acquired the company from John Garfield, who owned it in the interim, in 2001. And that is how it remains today, with Geoff Marshall as president.

Since 1965, more than 275 M-22s have been built and most are still sailing. Designed as a daysailer or weekender, the M-22 is an ideal family boat, with a spacious deck set on a stable hull.

I found 11 M-22s listed with brokers, ranging in age from 7 to 47 years old, and in asking price range from $15,000 to $70,000. I focused my attention on those in Massachusetts, including four at the Marshall Marine brokerage. Others were located farther away in Maine, Connecticut, New York and North Carolina.

These used boat prices, which averaged $31,000, seemed like a good starting point. I hadn’t considered the catboat might have a bowsprit, which on the new M-22 is optional and primarily provides a handy place to bolt an anchor roller. The reason: I had envisioned sailing the summer swells in an iconic catboat, its mast rising from the most forward part of the deck. As a result, I avoided searching for the sloop model of the M-22 because the mast is located farther aft and stepped atop the coachroof. The sloop model has a clubfoot jib and uses the sprit to support a forestay.

After talking with a few owners, I quickly learned that the M-22 hull is relatively bulletproof—made from hand-laid fiberglass matt and roving, or as owners will proudly tell you, nothing blown in or vacuum bagged. The phrase “structurally sound” repeatedly emerged and I was glad to know the retrofit would not include replacing any garboards or other key planks that might have rotted in a wooden hull.

Better still, if the fiberglass hull proved sound, I hoped the work list would consist of sanding, varnishing, painting, replacing the running rigging and snaking some wires rather than having to install a new engine or address a moisture-saturated deck and cockpit sole.

I decided on a boat built after 1980, ensuring the engine would be a Yanmar diesel, most likely a 3GM installed between 1980 and 1985.

Due to price and my preference for a Yanmar diesel, I narrowed the search to those boats built between 1980 and 1985. I further distilled the field after learning Marshall Marine replaced its plywood-over-fiberglass cockpits with molded fiberglass cockpits in 1983. Three boats fit the criteria and I purchased a 1985 model for $29,500.

Because the boat was nearly 30 years old, I knew additional investment dollars would be required. The electronics were toast. The head didn’t comply with environmental regulations. The bowsprit was cracked. The mainsail was baggy and tired. The dodger and sail cover were tattered. The centerboard pivot pin was worn. The transom contained some moisture. The main halyard was badly chafed. The cockpit cushions and bimini were missing. But the professionally maintained Yanmar 3GM diesel was purring, needing only new filters and an alternator. The meter showed less than 500 hours. The compass and Edson wheel were both functioning properly.

Adding a new sprit for the anchor roller cost $1,200 at Marshall Marine. A new dodger set us back another $2,200 at the same boatyard and the sail cover could be purchased online from Mauri Pro Sailing for approximately $460. Marshall Marine also quoted the price for a new head with holding tank and discharge valve at roughly $3,000. A new mainsail from Quantum Thurston was estimated at $2,050.

Wiring costs would depend heavily on what we wanted. I managed to get the navigational and cabin lights working by running some fresh wire purchased at West Marine. I cleaned the appliances and installed new light bulbs. Total cost: $25.

Purchasing and installing a chartplotter, and a combined Raymarine Wireless device with wind speed, boat speed and depth threatened to push our investment higher by at least another $2,800. For that, I looked to Defender Industries for a reasonable price on the Raymarine Wireless T108. That meant the bimini and cockpit cushions would have to wait.

Although a moisture meter pointed to potential problems in the cockpit sole and fiberglass-over-plywood transom, the surveyor assured us these were common issues that did not require attention.

The bilge blower was broken but could be replaced for about $30 after another trip to West Marine. The Yanmar would require new filters, and a rebuilt alternator, available online through Ace Marine Diesel. These do-it-yourself expenses were under $300 for materials plus sweat equity.

I also undertook the interior painting and deck brightwork restoration myself, which beyond elbow grease, amounted to a halfgallon of varnish and a quart of paint. The smaller items once again came from the shelves of West Marine. For $250 a local carpenter installed the rubrails I refurbished. The mainsail halyard cost $225 from New England Ropes.

Certainly I could have purchased an older boat with a gasoline engine and plywood cockpit for far less money, but I was looking for a long-term relationship enabled by eliminating the elements we suspected would eventually cause trouble.

Bottom line: I purchased and retrofitted a classic Marshall 22 Catboat that was now in turnkey condition with a solid fiberglass hull, molded cockpit, new mainsail, compliant head, state-of-theart navigation system and a reliable diesel engine for a grand total of $42,040. 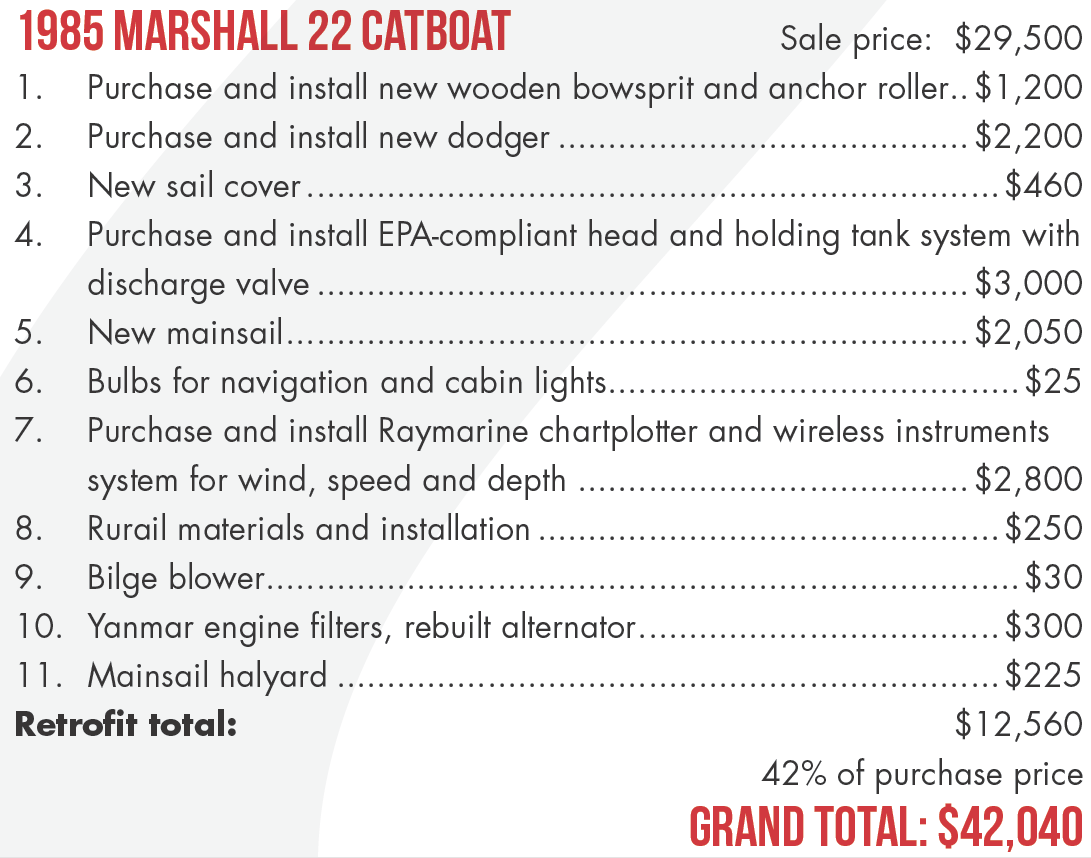