Launching and boarding a life raft Walter Cooper photo
There’s an old saying, “Step up into the life raft,” implying that you should not launch your life raft prematurely in an emergency. And while many old sayings are often just that, old and out of date, there’s merit to this wise advice. A life raft is a vessel of last resort, to be deployed only when all efforts to save the mother ship have been exhausted. I have been aboard two seriously leaking boats in my long career and while I considered abandoning both, in each case I managed to eventually find the source of the leak and make emergency repairs. There are plenty of documented cases of crews abandoning what seems to be a sinking boat for the perceived sanctuary of the life raft. Tragically the crew perishes while the supposedly sinking boat survives and washes up on a distant beach. But make no mistake about it, there are genuine emergencies afloat when the only bridge between life and death is the life raft. Having a top-quality raft and a well-rehearsed plan for launching and boarding it is prudent seamanship. Having the plan in place and ready to execute also affords critical extra time to find and fix the problem.

For many years I have conducted offshore training passages aboard my cutter Quetzal. Early on the first day of every voyage, without fail, we discuss among other safety issues, abandon ship procedures. Even if a crewmember has sailed with me 10 times they’re subjected to the hour-long lecture about how, if a dire situation arises, we will leave the good ship Quetzal. There are four likely circumstances that might require abandoning ship and taking to the raft: a sudden collision resulting in an irreparable breach in the hull, a leak that cannot be contained, swamping from storm conditions resulting in a lack of positive stability, a fire that can’t be controlled. In each case, survival hinges on avoiding panic and successfully launching and boarding the life raft.

The plan you devise will differ based on crew size. On Quetzal we have the luxury of a full crew, usually five or six of us are aboard and each assigned a vital role. The “life raft” person is responsible for preparing the raft by removing it from its storage position, (or making the straps ready for deployment from a cradle) making sure the painter is attached to the boat, making sure she has a knife to cut the painter if necessary, and then to report to the skipper that she’s ready and standing by. Another crew is responsible for grabbing the fully loaded ditch bag, that is located on the top of the cockpit locker, securing it in the cockpit and standing ready to make sure it makes it into the raft.

A third crew is responsible for communications. This job includes putting out the proper distress call on the VHF, satellite phone and if applicable SSB, most likely a “pan pan pan” first and then as the situation deteriorates, a “mayday.”  The communications person is also responsible for grabbing the EPIRB mounted on the bulkhead near the radio and placing it in the Pelican waterproof box which also contains a fully charged handheld satellite phone, handheld VHF, PLB and a SPOT tracker with a mayday function.

Another crew is charged with sailing the boat. This job is far more important than it sounds. The vast majority of leaks develop stealthily, and almost always on the low side. The most important tactic in dealing with a leak crisis is to immediately tack and heel hard the other way raising the leak source and dramatically slowing the flow of water and buying time to pursue the leak. Sometimes the boat may need to be flattened out to facilitate searching for the problem. Finally, the skipper is responsible for finding the leak or putting out the fire, fashioning a repair, and ultimately, making the decision to launch the life raft and abandon ship. Leadership is paramount.

Mounting a new or freshly inspected life raft in a quick release cradle, or if it’s in a valise, in an easy access locker, before a passage is reassuring. You’re definitely doing the right thing and you’ve definitely made your floating world safer. However, most of us have never deployed a raft and underestimate what’s involved in transferring crew from a sinking boat to a bobbing raft. Unfortunately it’s not practical to practice life raft deployment and boarding techniques. It’s expensive to repack the life raft and can also be extremely difficult to retrieve it after a practice launch. The best alternative is to attend a safety at sea workshop where life rafts are deployed. However these usually take place in a pool, or from a dock, and don’t accurately simulate emergency conditions at sea.

I’ve taken a different approach in my offshore training workshops. We launch the demonstration raft from a sailboat, at sea. We don’t go looking for storm conditions but just heaving-to in 2- to 4-foot waves offshore, launching the raft and climbing aboard from the boat and from the water, in foul weather gear and with an inflated PFD, is instructive and revealing. It’s not easy. Here are some tips to consider:

1. Once the skipper gives the word to deploy the raft, it is either released from a cradle directly overboard or released and manually tossed overboard. Although it’s often done, it makes no sense to mount a life raft cradle on the foredeck. It will be difficult to reach in storm conditions and can be swept overboard. More and more offshore boats are using stern rail cradles for canister life rafts. Even so-called lightweight rafts are heavy. Take your time and make sure the raft and painter are clear of obstructions. Sometimes the impact will cause the raft to inflate but most likely you will inflate the raft by pulling the painter. Be calm and pull evenly. When the painter becomes difficult to pull, yank sharply, releasing the CO2 by pushing a plunger through the cylinder.

It is an excellent idea to have a Hydrostatic Release Unit for your raft and cradle in case your boat sinks suddenly and there’s no time to launch the raft. This device automatically severs the raft from the cradle housing by activating a blade once the boat is submerged a few meters. The painter, which is attached to the vessel, will be stretched by the sinking ship, triggering inflation and the buoyant raft will then ascend breaking the painter at a designed weak link, allowing it to reach the surface. HRUs typically sell for about $100 and can be fitted to any raft. Once the raft inflates, pull it alongside but leave a bit of slack in the painter.

2. Take the time to drop the life raft overboard so that it inflates right side up. About 50% of the time our test raft capsizes once in the water or when the painter is deployed, and subsequently inflates upside down. Good quality rafts are always fairly easy to right but it means that the first person overboard must be a fit, strong swimmer and keep a cool head while righting the raft.

In fact, when it comes to boarding the raft, the first person aboard should be among the most able of the crew and be capable of helping other crew members into the raft, especially if an in-water boarding is required. New self-righting life rafts are a terrific design improvement.

3. Once the first person is aboard, carefully transfer the ditch bag to the life raft, then the rest of the crew. When you are considering a life raft, note how easy it is to enter through the canopy and how easy it is raise the canopy afterwards when jumping directly aboard. Ideally, it’s best to board directly from the boat but not likely. With this in mind, pay close attention to the raft’s boarding apparatus as chances are you will be climbing in from the water.

4. Boarding from a pitching boat in heavy seas is dangerous. It may be safer to board from the water. You must realize that this is  a distinct possibility. The first person in the raft should also carry a throwable line in case the next person in the water cannot reach the raft. This is a very real problem. I will probably be hammered by the safety police but I suggest the next time you are offshore in light to moderate conditions drop all sail, let the boat bob, and with the boat fully crewed and long safety line deployed, take the time to test your life jacket by jumping overboard and in the process see just how difficult it is to swim in a seaway. It is difficult to swim at all with an inflated life jacket and worse still fully clothed. It is critical in an in-water boarding situation that each crewmember stay as close to the raft as possible.

5. The painter cannot be too tight or the raft will be crushed by the rocking boat so make sure there’s enough slack for the raft to obtain a bit of air space from the hull. It’s also dangerous for the crew if the raft is too close to the boat. Offshore rafts always have ballast bags and a drogue to steady them and can usually be maintained a safe but still accessible distance from the boat.

6. Make sure that the gear in the raft is secure and not rolling about making it more difficult for crewmembers to board. Once everyone is in the raft, cut the painter line and allow the raft to float away from the disabled boat. Be sure the raft is clear of any link to the boat such as lines and rigging wires. Don’t be surprised by the hissing noise as the pressure valves release excess pressure; it’s normal.

7. Once in the raft, immediately make sure the crew is OK. It’s not uncommon for cold water to trigger hypothermia in quick order and panic and despair can soon follow. The ditch bag must contain seasickness medicine for even the stoutest stomach will succumb in a life raft.

This is the time for steady leadership from the skipper, don’t devolve into blaming someone or something for what caused the boat to sink. Methodically go about accounting for and securing survival gear. If a mayday or other distress call has not been issued, use the devices (handheld radios, satellite phone, trackers, EPIRBs) and do it immediately. If another vessel is in sight but not in contact, launch a flare. New electronic flares are an essential addition to the ditch bag.

Most importantly, stay calm. The human will to survive is a powerful force and once harnessed can achieve incredible results. While survival strategies will be the subject of another technique column, remember that once you’re in a life raft you have the means to survive and that’s your only job. 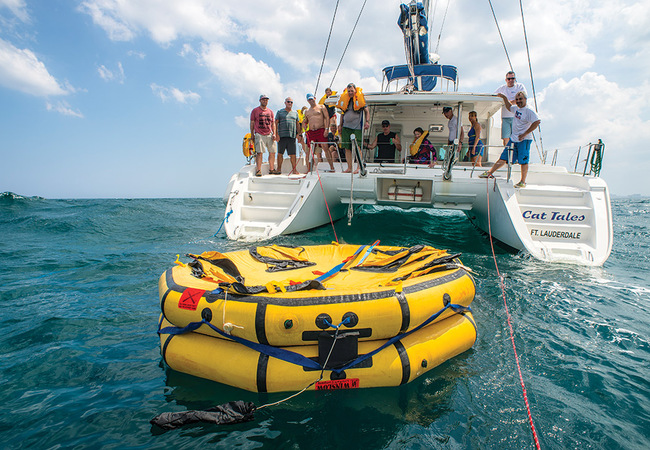 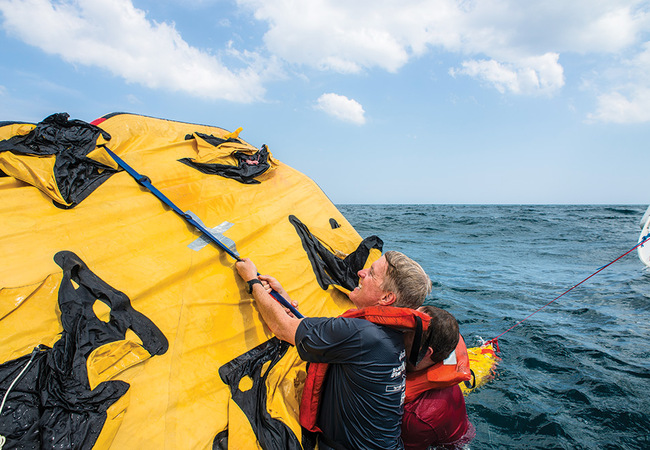