Bluewater sailor John Kretschmer reflects on savoring the best parts of sailing, even when they aren’t great

The forecast wasn’t good, but it wasn’t terrible either. We were bottled up in the Gulf of Maine and the fresh south-southwest winds of summer made the prospect of sailing to Bermuda a likely slog. Twenty-knot headwinds, drizzle, temperatures in the low 60s, and of course, fog, completed the cheery outlook for the first few days. Afterward, the 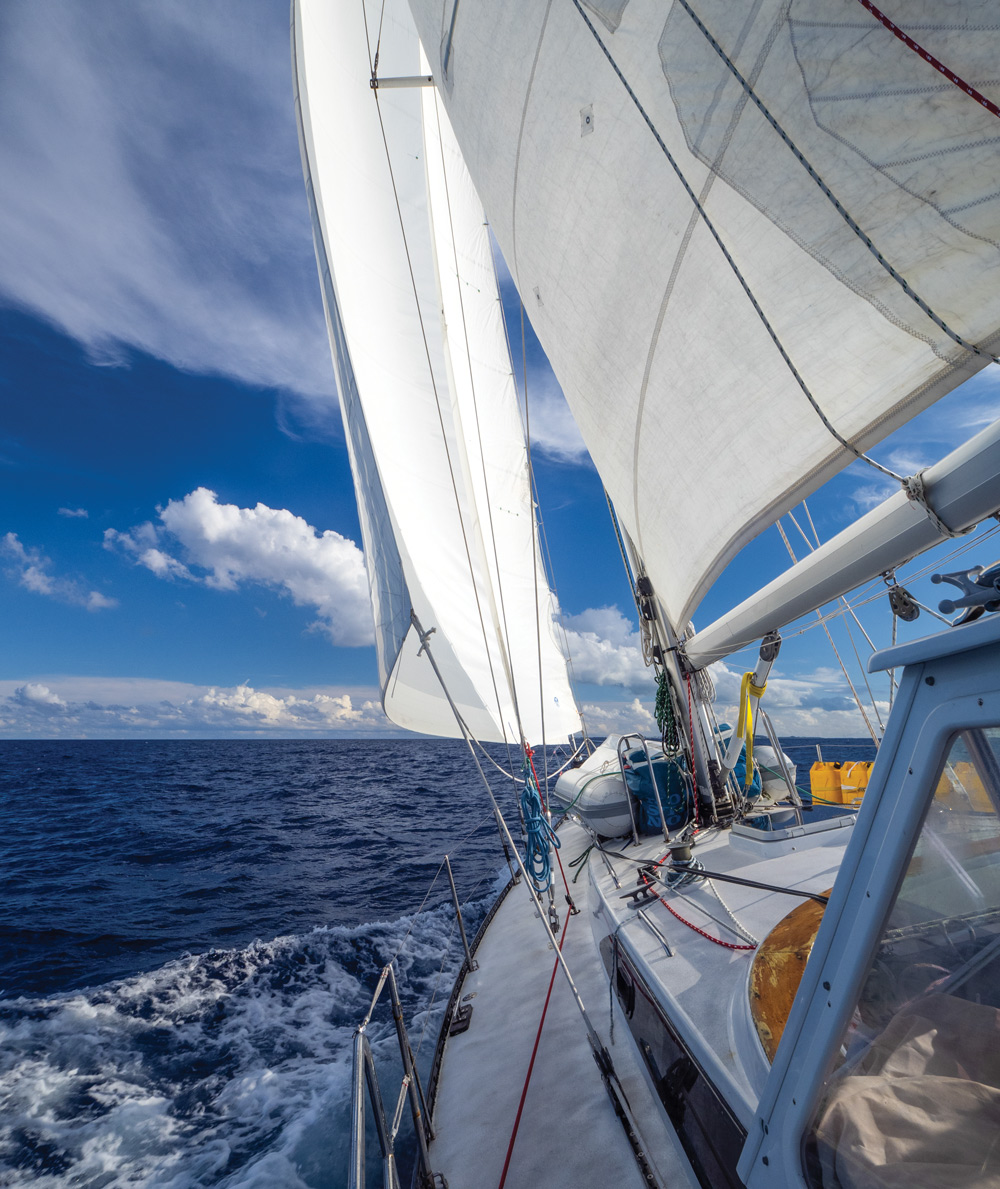 Quetzal sails rail down on a reach.
Ken Zill photo
digital overlords who magically produce the GRIB files that peer into the future and govern our every move, promised backing south-southeast winds and filling in at 25 knots. Were you wondering about our course to Bermuda? Try 160 degrees true, also known as south-southeast. Alas, 700 miles hard on the wind. Maybe we should have called them GRIM files instead.

I am not superstitious, far from it, but I did suspect that my old friend Neptune, at times a vengeful god with a sardonic sense of humor, might pay me back for the lovely sailing he had served up just a few weeks earlier. Leaving trusty Quetzal, my Kaufman 47, in Portland, Maine, after a two-step sail from St. Thomas via Bermuda, I dashed back to St. Thomas in the U.S. Virgin Islands to pick up a dear friend’s Tayana 48 cutter and sailed her up to Solomons, Maryland. (I know, lots of sailing, but that’s what I do and, basically, have always done.) I had five friends/clients aboard (the line is wonderfully blurred for me) and we had easy reaching most of the way. We knocked off 1,350 miles in nine lovely days, marveling at how inspiring bluewater sailing can be. It was the kind of sailing that made people who should know better talk about buying a cruising boat, selling the house and shoving off for distant quaysides. I always seem to forget that the philosophy of sailing is directly proportional to the point of sail. Back aboard Quetzal in the gray, lumpy Gulf of Maine, inspiration was a bit harder to find.

But I can’t stay blue at sea, not for long anyway, not at my age. Headwinds, heeling, heaving sheets of spray, what the hell, let’s face it, sailing is a privilege and, flat out, a thing of beauty. Fifty-five years ago a sailing magazine was launched on this simple but profound premise, that sailing is beautiful. I am here to report that after not quite 55 years of near continuous sailing, Bill Schanen Jr. got it right, sailing is indeed beautiful, even when little else is.

My attitude shift was infectious and the five of us aboard tied in the second reef with gusto and furled a bit of the headsail. Quetzal flattened out in gratitude and not surprisingly sped up. Flat, or at least flatter, is always faster. As we sluiced through building seas at nearly 8 knots I smiled, for the millionth time, at the near mystical conversation Quetzal is ready for the sea.
Ken Zill photo
that takes place between rudder, keel, wind, waves and sails. With a bit of trim and a little pleading, they put their partisan differences aside and get together to make Quetzal soar. And speaking of conversations, the day had literally blown by and it was 1700, time for captain’s hour. This is ritual aboard Quetzal, we gather in the cockpit and share stories, jokes and sometimes, our souls. Sometimes we have a drink.

I knew this was going to be a great passage. Huddled in the full enclosure, the gloomy weather couldn’t corral our zest. We broached the big three: religion, politics and Covid, without derailing our budding friendships and sense of purpose. Indeed, the reality that we were sailing a small boat across a big stretch of ocean dwarfed our differences. We had important things to talk about: what makes a good sea boat and what the heck is forereaching in a storm? I am always impressed with the folks that find their way into my floating world. They build, cure, teach, protect, in short, they shake the world when ashore. But aboard Quetzal they feel refreshingly small, humbled by the wilderness that is the ocean and inspired by the challenge and sheer beauty of sailing. We invariably find ourselves pulling together as a team because we understand the pact, the implicit deal that every bluewater sailor makes when they shove off: this is our passage, every bit of it, the good, bad, ugly and the beautiful.

The wind finally eased a day out of Bermuda, and we shook the reefs for the first time in the passage. Before the echoes from the depthsounder could find the bottom, we hove-to and took a swim. I love to swim offshore in deep water. Climbing up on the bow pulpit we used the leftover rollers still rocking the boat as a catapult to launch a few mighty halyard jumps. If you timed it right, you felt like you were flying above the spreaders before releasing and plunging into the sea. If you timed it wrong, you felt like an old guy hanging on for dear life hovering just above deck level.

Bermuda is not impressive from a distance, a thin dark line that reluctantly rises above the sea as you pass east of the reef that stands sentinel over the northern shore. It looks more like the water is receding than the land is rising. The shades of blue that encircle this tiny island oasis are a different kettle of fish, they’re stunning and belong in an art museum. I found myself smiling again as we made our way through narrow Town Cut Channel. Pastel houses sit atop rocky outcroppings as you emerge into St. George’s harbor. The transition is dramatic, in a matter of 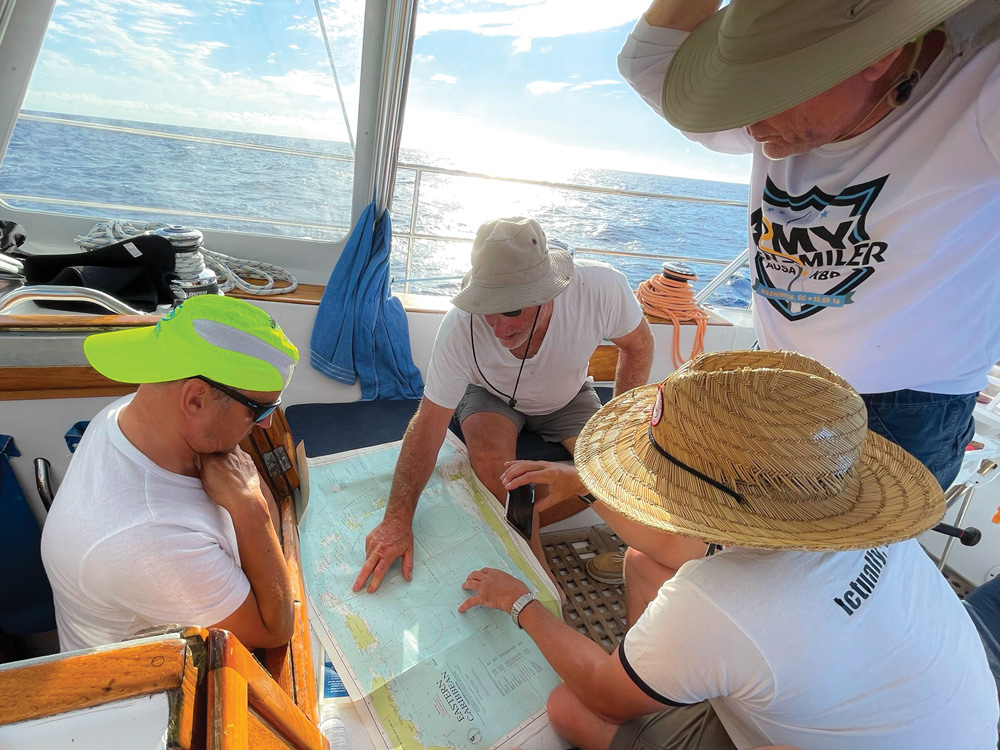 The crew plans the next leg.
Ken Zill photo
minutes you’ve gone from a bounding sea to a protected harbor that seems almost like a fairy tale. I have sailed through this pass, coming and going, more times than I can remember but the promise of landfall and surprises ashore never wanes.

But I am a sailor, and a few days later I was away again, another passage, another crew. There would be more challenges for sure and more opportunities for mishap and beauty. We were bound for Solomons, Quetzal’s home away from home, 700 miles to the west. There was no need to hurry, tropical storm Elsa was dashing up the coast spreading mischief from the Carolinas to New Jersey. We could have tarried in Bermuda but instead of staying in port, we chose to spend the first day heading south on a close reach. We tacked just before twilight and a gentle south wind filled the sails. Quetzal felt like she was riding Sinbad’s flying carpet, gliding almost silently across the water. You’d think that after all these years, after all these miles that the magic would falter, the passages become mundane? Weirdly, and wonderfully, that hasn’t happened, at least not yet. The prospect of this new passage filled me with wonder and purpose. Maybe I am just getting simple as I age, or maybe I am seeing sailing the way it really is – beautiful. SAILING Magazine has always understood, and I am honored to have contributed to this enduring and beautiful magazine.