This was clearly one of the boats I liked best at the recent Strictly Sail Miami Show. Although manufacturers are offering a host of mid-30-foot multipurpose boats as the sailboat market continues to come back to life, the Catalina 355 stands out from the pack. It's a handsome, well-proportioned boat of moderate beam and freeboard. The fairly low-slung cabintrunk completes the pleasing profile. The 355 looks right-it looks like a sailboat. Remember the axiom, form follows function? It definitely applies to this latest model from one of America's most respected builders. The 355 was introduced at last year's United States Sailboat Show in Annapolis, Maryland, and has been well received by sailors around the country. It takes its cues from Catalina's successful 2009 model, the 445. It is basically just a smaller version, which resonates in today's cautious economy. 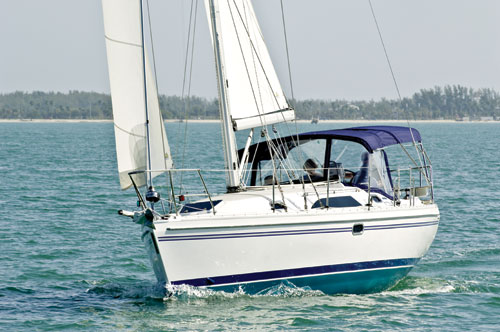 The 355 is efficient under sail and user-friendly for comfortable cruising. The cockpit is a prime example of such comfort. The helm seat has been raised and the sailing instrument pods placed outboard, resulting in terrific sightlines from behind the wheel and a nice steering perch when heeled. The primary winches are located well aft, allowing the helmsman a full throw of the winch without releasing the wheel. The molded pedestal houses the engine instruments in a spot where you can actually see them. The cockpit is deep and secure while the backrests are angled for comfort and the benches are long enough to sleep on; Catalina trademarks. The stainless steel cockpit table base doubles as a stout foot support. Our test boat was fitted with an expansive bimini top and spray dodger.

The details
The 355 is well engineered and manufactured using Catalina's unique five-piece system. The first piece consists of a one-piece solid fiberglass hull. Next is a molded structural grid that is designed to support serious loads, including the keel, mast and rig.  By molding the grid separate from the larger hull liner, Catalina is able to make it strong without comprising its construction to support furniture facings. The one-piece molded hull liner is part three, while the molded deck liner is part four. The deck liner is actually bonded to part five, the deck, while both pieces are still in the mold, require manufacturing precision.
The 355's deck is balsa cored. Catalina has always used lead keels, and the 355 is no exception. Lead concentrates the weight where it should be, down low, and although it is expensive, it's the best material for keel construction. The keel is externally fastened to the hull with beefy 316 stainless bolts. The rudder is a stainless steel framework with fiberglass over a foam core. On deck
There is a huge, well-organized locker to port designed, in part, to stash folding bikes. The opening to the stern step has a clever retractable lifeline gate and the stern rail seats are hard to resist. In fact, I spent a good portion of the boat test perched on the starboard seat while scribbling notes. The clever stern rail incorporates a lower outboard motor bracket that is well placed for easier motor handling. Twin backstays open up access to the wide stern step. Naturally all sail controls are led aft, and I especially like the 5-foot Garhaurer traveler with 6-to-1 purchase and single-side handling from the port side.

Catalina has returned to its traditional diamond pattern nonskid. Well-supported 28-inch stanchions and stout handrails on the coachroof lend security when navigating from the cockpit to the foredeck along the relatively narrow side decks. The genoa tracks are well inboard and long enough to move the leads forward for efficient trimming even when the furling genoa is reefed. The shrouds are set well inboard, allowing for tight upwind sheeting angles. The anchoring arrangement is rather impressive. The 355 features double stainless rollers, a fairly deep locker and an electric windlass. The aft bulkhead of the chain locker is actually part of Catalina's patented "impact absorbing collision zone," a watertight bulkhead that will help keep the boat afloat in the event of a collision.  A removable bowsprit, which stores in the chain locker, allows for a furling Doyle UPS reaching sail to be flown forward of the pulpit. 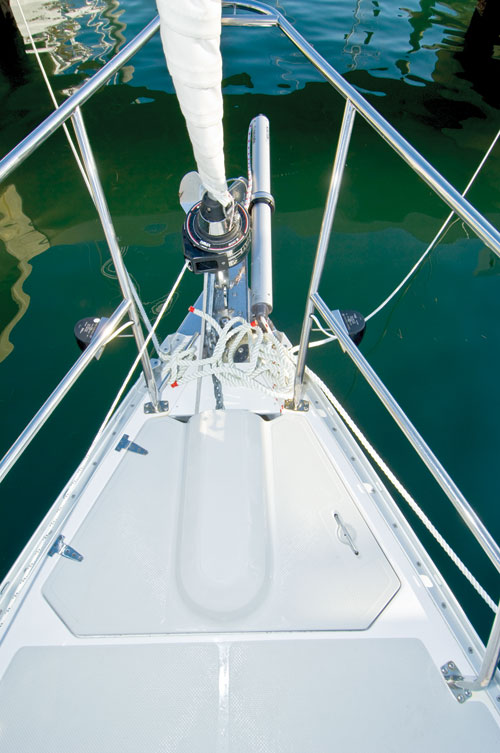 Below the waterline the 355 has two keel configurations: the standard fin keel with a 6-foot, 8-inch draft, and a wing keel that draws a more moderate 4 feet, 6 inches. The balanced rudder is positioned well aft and provides excellent steering control, even when running before following seas. Designer Gerry Douglas' hull shape is subtle. While the waterline is quite long, there is still a bit of rake to the bow and a nice lift to the stern. Like I said, the 355 looks like a sailboat.

Down below
The interior plan works brilliantly because Douglas does not try to make the 355 fit every bill. It is a genuine two-cabin boat with one terrific head, a working galley and a very comfortable saloon. What more could you ask for in a boat less than 36 feet long? I was impressed with both the quality of the teak joinerwork and the overall attention to detail.
Three wide, relatively shallow steps escort you below. The L-shaped galley is to starboard. The two-burner stove and oven is outboard with a microwave above. Double sinks face forward and are mounted close to the centerline for clear drainage on either tack. The fridge includes both top and side-loading hatches. There's adequate food storage in lockers above and under the stove. Access into the aft cabin is through the galley and it is a bit tight. The cabin, however, features a genuine double bunk and a cedar-lined hanging locker.  Catalina has gone to innerspring mattresses and that's a very nice upgrade.

The saloon feels large, in part because of the 6-foot, 5-inch headroom, light teak veneers and plenty of natural light. The layout is clever. The port side settee can also be configured as two seats with a small table between. To starboard, the U-shaped settee includes a quad fold table that extends from cocktail sized to one that can seat six. The head is aft to port and is rather stylish. Douglas calls it "spa-style," and it includes a raised glass vessel sink, which looks like it might be vulnerable when clutched in a seaway, and a large shower area.  Just forward of the head is a small, aft-facing nav station designed for a laptop and minimal chart stowage. The electrical panel and a separate accessory panel are above.

The forward cabin, or owner's cabin, is luxurious, especially in a boat this size. The double island bunk lifts on the aft end to reveal a large storage bin. The mattress articulates at the forward end, and with the help of an electric lifting device can be inclined to a comfy angle for reading or watching television. There are cedar-lined lockers, a good-sized hatch above and room enough to stand and dress comfortably. 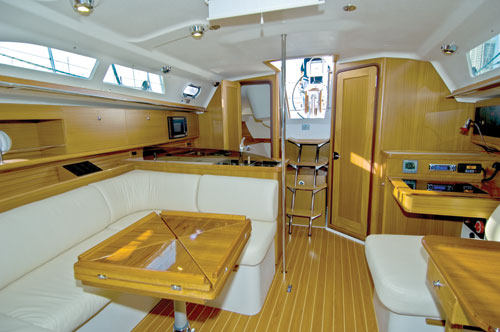 Access to the three-cylinder, 29-horsepower Yanmar diesel is from behind the companionway. The steps pull completely away, making the engine easy to service. Access to the stuffing box is more challenging, although the 355 employs a dripless-style stuffing box, limiting the need to check it regularly. The fuel capacity of 30 gallons will likely translate into a season of motoring. Other systems include hot-and-cold pressure water with just over 100 gallons of freshwater in two tanks and an oversized 12-volt battery arrangement.

Under sail
Out on Biscayne Bay the wind was freshening at last. A light southeast breeze was showing some life and sailing on a close reach with the standard 135% genoa the 355 glided across flat seas at near 6 knots. The 355 is just about masthead rigged; the Seldon spar is a 19/20 fractional section, an arrangement that incorporates the best of both worlds. The mast is deck stepped. Bringing the boat hard on the wind we maintained speed at 40 degrees apparent.
The 355 should like to be sailed flat, on her lines, thus reducing any benefit of trying to squeeze too high. The helm was light, and quite well balanced. We brought the boat through the wind several times, tacking easily without the hindrance of a staysail stay.

I really like the concept of the UPS sail that is furled on its own luff forward of the headstay and out of the way when maneuvering up wind. In heavy weather it can be dropped all together. Off the wind, we reached under the genoa and topped 6 knots in the puffs. Turning the helm over to Steve Sullivan, I climbed into the port stern seat. The view was ideal. The 355 is part of Catalina's Cruiser Series, which also includes the 309, 320 and 375. Catalina Yachts recognizes that in order to succeed their boats not only have to perform well, be comfortable and user-friendly, they also have to be exceptional values. With a price at about $170,000, which includes sails and basic electronics, the 355 fits that bill to a T.