Transiting the Panama Canal is a rite of passage that packs a lot into a 50-mile journey. Whether crossing from the Atlantic to the Pacific or vice versa, cruisers celebrate their arrival in Central America by taking this short cut that recently celebrated the 100th anniversary of the opening of a channel cut through mountain and jungle in an engineering feat for its time.

I joined Pamela Stone and Paul West aboard their Irwin 43 TugTub, when they set off cruising from Long Beach, California. Having explored the Pacific from Baja to Balboa, they were ready to cruise the Atlantic, and invited me to transit the canal as a line handler, along with another California friend Lynn Dines. Sheila Hubbard, a canal veteran and aficionado, begged to join too. The final member of the crew was Tito, the required professional line handler. 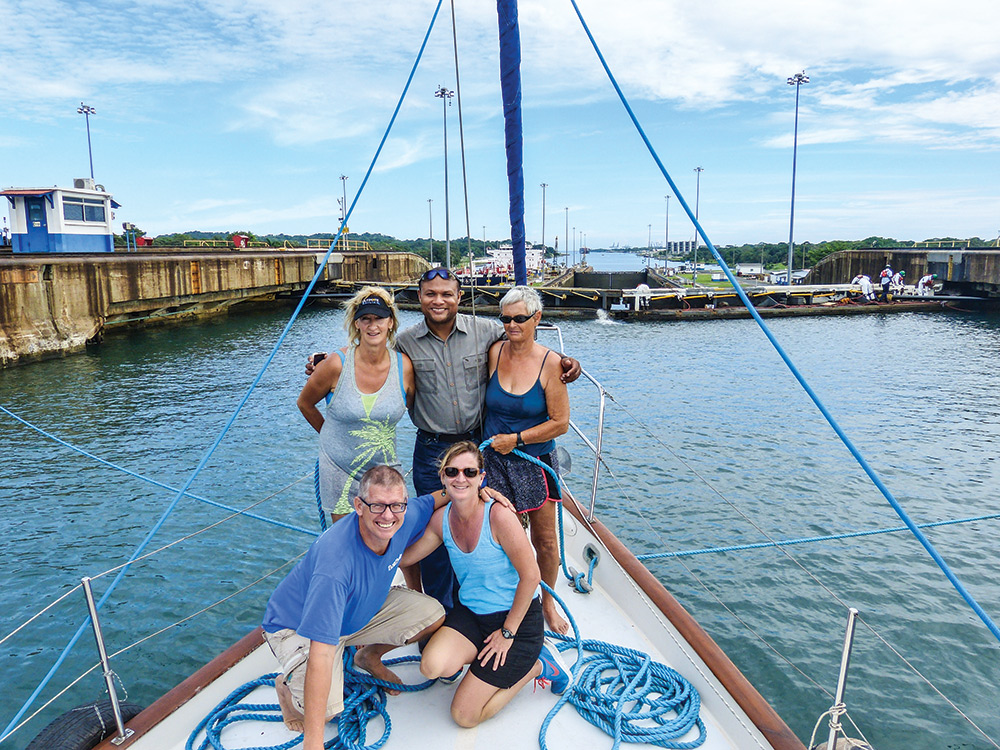 We converged on the Pacific side at the Balboa Yacht Club, a misnomer if there ever was one. It’s renowned as one of the least cruiser-friendly locations, where boaters must lug gear and provisions through the pub, across a lawn and rubble road, down a steep staircase, along a long rutted path, past a seething Haleakala of garbage, traverse a lengthy uneven footbridge, down more stairs to a crumbling concrete dock, to await a grimy panga to take them to a mooring situated in the lumpy, noisy anchorage. It’s a necessary evil, but one made more tolerable by the use of a good agent, which allows sailors to plan ahead and minimize time in Balboa. (Cristóbal Colón, on the Atlantic side, is said to be equally undesirable.)

Paul had contracted Delfino Maritime Agency and Peter “Don’t-Worry-About-It” Stevens, whose 35 years of experience and references did more to appease anxiety than his relaxed attitude. Having an agent isn’t necessary, and it adds roughly $500 to the transit costs, but Peter’s ability to navigate the paperwork and get us swiftly scheduled proved valuable.

Transit fees for TugTub based on LOA were $1,500, and included the services of a mandatory onboard advisor. There was an additional $500 in miscellaneous cost that covered Tito, who came with the appropriate docklines—four 125-foot 7/8-inch lines—and a score of fenders.

We spent our final day in Panama City provisioning at one of the several excellent American-style supermarkets before a quick visit to the Panama Canal Museum at the Miraflores Locks for a history lesson. The City of Panama was founded 500 years ago. Almost immediately, a trade route was established between the shores, and a few years later King Carlos I of Spain envisioned a waterborne link. But it was the French who ultimately began work on the canal, after its success with the Suez Canal in 1869. However the initial plan, to build a sea-level ditch 72 feet wide and 9 feet deep, was abandoned after more than $100 million was spent and 20,000 lives were lost. The United States took over the project in 1904, and the canal officially opened August 15, 1914.

After perusing the museum exhibits, we watched from the balcony and familiarized ourselves with the process, as several massive ships passed through the locks. Later we enjoyed a fabulous dinner in the chic Casco Viejo neighborhood. Panama City is a dichotomy of privilege and poverty, contemporary skyscrapers and rickety shacks. With its American influence, it feels both familiar and foreign at once. Nostalgically, we toasted to our last day in the Pacific, and readied for an early morning.

By 5:40 a.m. Tito had not yet arrived. We sat in the dark in the rain drinking Nescafé, trying to keep it from spilling in the roiling anchorage made worse by the parade of ships and tugs steaming by.  Tito arrived at 7:55 a.m. and nonchalantly played with his cellphone on deck. He had done “maybe 600” transits as a hired hand, so it was all too familiar to him, even the waiting-for-the-rain-to-stop drill. The rest of us huddled below, the deluge pummeling the hatches.

Finally, at 9:23 a.m. a pilot boat approached TugTub outside the Bridge of the Americas. After a few delicate attempts to come alongside, our advisor boarded. Ricardo works as a professional tugboat pilot, and was very familiar with the transiting process. He explained that in visibility less that 1,000 feet, operations stop, so we continued to circle in the unrelenting rain. 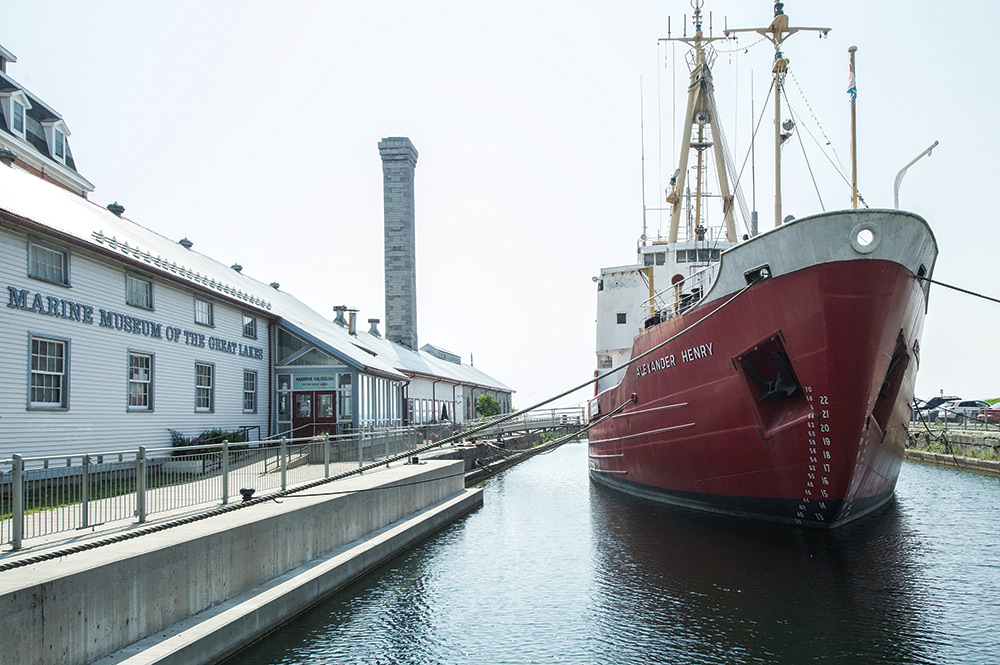 Then suddenly, it was our turn. Trepidation evolved into excitement as we advanced slowly toward the canal, dodging swirls of trash and debris in the muddy water. Ricardo gently instructed us, and Pamela announced, “As long as Ricardo is smiling, I’m happy.”

First in was Maritime Suzanne, a 600-foot tanker hailing from Hong Kong, squeezing her 105-foot beam in. Panamax boats, 1,000 feet long by 110 feet wide, are the largest accommodated in the canal, and leave just 24 inches of wiggle room on either side. Next up was a Panamanian sportfishing boat Belmare, with a friendly family aboard. The crew retrieved the messenger lines tossed down a wall some seven-stories high, then fed their lines up to the workers on the wall. Once secured, we came alongside, fastened our bow, stern and springlines, and adjusted the bounty of fenders between us.

Lynn’s husband was home, watching from the Miraflores Lock webcam www.pancanal.com, texting and posting our images to Facebook. At last, it was really happening: and we had witnesses. There was no stopping or turning back.

The water entered with only mild turbulence. Gently we were lifted up 52 feet in the first of two locks we would ascend. It was shortly after that we saw why we had 10 fenders on each side, as Maritime Suzanne cranked up her engines to depart. The water churned as she eased ahead, helped by the 50-ton electric locomotives called mules that tow the lines of the big ships, with duel 290-horsepower engines.

Repeating the procedure for the second Miraflores lock, we said farewell to Belmare, who zoomed ahead, while we proceeded to the Pedro Miguel lock. Our next side-tie was a tugboat, which gave us more concern—they were professionals, not recreational boaters, and perhaps not so inclined to accommodate amateurs like us. Every day that week, the agent said some disaster had befallen a transiting boat. Someone fell in. A boat didn’t detach from the raft-up quick enough, and did 360s in the canal. A cleat ripped out.

Ricardo assured us no such thing would occur, and as if to prove his authority, he barked at the tugboat crew to re-tie our springlines for a more fair lead. We were pleased, and when the massive Maritime Suzanne fired up a final time, even more so. The powerful eddies of her turbocharged engines threatened to dash us about. But we held firm to the tug, and they to the wall, until Maritime Suzanne was gone.

From Pedro Miguel we entered the Culebra Cut, an eight-mile passage forged through the mountains. Some 60 million tons of dynamite were used to construct this route. A squall appeared ominously to port obliterating the jungle as I was at the helm.

“Get ready for the rain,” Pamela said. And sure enough it overtook us, unleashing a torrent of water, pouring so hard even Ricardo seemed concerned. We throttled back. I could see nothing at all in front of us, and certainly not the large containership advancing in the southbound lane. But we had the radar going, the AIS, and a constant banter with canal control. I stuck to compass headings Ricardo shouted out, clinging to the right side of the channel, straining for a glimpse of the green buoys. Eventually the rain eased, but it became clear we wouldn’t get through 18-mile-long Gatun Lake, and to the locks before they switched directions. Instead, we headed for the cheeseball, a large gouda-shaped mooring on the far end of the lake. Once there, Paul and Lynn braved a dip in the cool fresh water. We spent a quiet night nestled between two continents and two oceans.

Tuesday could not have been more different than Monday. The day dawned clear and was already abuzz with containerships and tankers that had amassed overnight, when a pilotboat buzzed out from Gatun Locks at 7:30 a.m. It proficiently sidled up and offloaded McClean. He was polite but pragmatic. “Coffee: black. We leave right away,” he said. 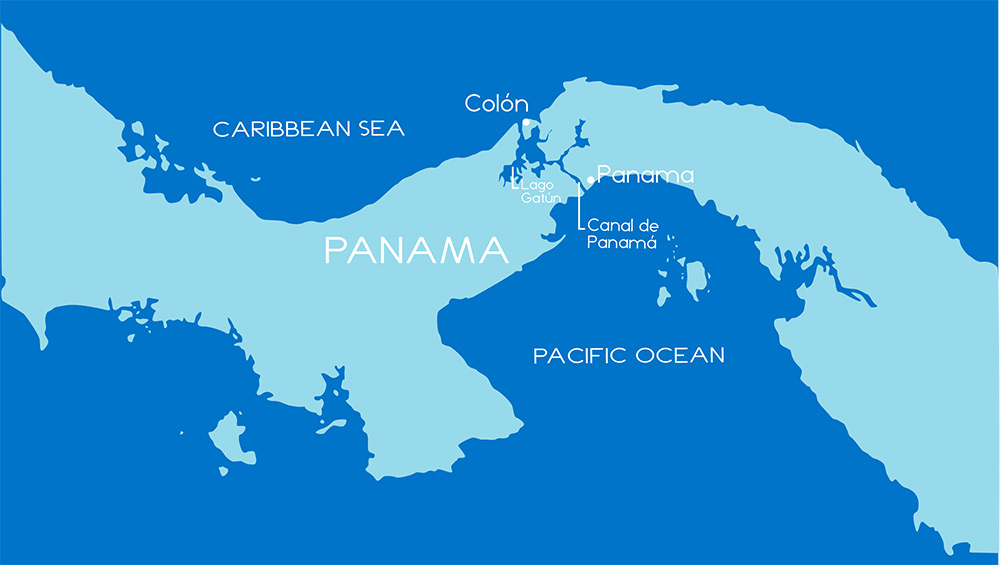 Instead of the prior day’s hurry-up-and-wait affair, we advanced directly to the first of the three locks. We would be tied in a center channel position, with an enormous cargo ship Ocean Favour right up our rump.

The Gatun Locks consist of a trio of adjacent chambers that drop in quick succession from the lake to the Atlantic 85 feet below. This time we entered the lock first. The workers walked high above us on the retaining walls, keeping pace with TugTub. One by one they threw a messenger line with a monkey fist at the end, to each of the four corners of the boat. Each one was tied to the bowline at the end of a dockline, then hauled up to their level, and looped over the bollard. Once secure, they signaled for us to tighten and cleat off our ends of the lines.

Next Ocean Favour advanced astern. The 37,000-ton, 750-foot behemoth edged closer, halting 50 feet astern. Slowly the water level dropped, and as it did we eased out the lines, keeping the boat square. McClean hung out on the bow to guide us, and regaled us with the history and workings of the canal. As we descended, we watched our progress on a ruler on the battered wall. Evidence of 100 years of scrapes, collisions and decay was visible, and we contemplated the many vessels from around the world, that had passed this way over the century.

Then the bell rang and the steel gates slowly opened in front of us. Each gate is 65 feet wide and 9 feet thick, and ranges from 45 to 80 feet tall, depending on the location. Those on the Pacific side are higher to accommodate the greater tides on the West Coast. Everything was done cautiously and without haste, and both of our advisors and Tito, were calm and clear with their instructions. The transit proved surprisingly routine, but went by in a blur. I could see why Sheila, who had transited before on her own 40-foot sloop Timeless, wanted to take it in again.

Finally we had transited all the locks and dropped the entire 85 feet, and the timeworn steel doors loomed over our bow. The bell chimed, a sliver of light appeared between the gates and the Atlantic Ocean beckoned ahead. The handlers dropped our lines and we scurried to haul them in as Paul motored into the blue-green waters.

“It’s surreal. The entire thing, the transit, and the whole concept that we’re on the other side,” Pamela said.

TugTub had been launched in the Atlantic nearly 30 years before, but after a brief stint out east, had been based in the Great Lakes and Pacific for decades.

“And now she’s come full circle, back to the Atlantic,” she said.

We dropped off Sheila and Tito, with his lines and tire fenders, at his next charge, a catamaran en route from France to Tahiti.

A warm breeze greeted us and we soon had all sails set, full main, jib and staysail. TugTub plowed ahead into the Caribbean Sea, with the Atlantic beyond and a whole new playground to explore.