Luxury and sailability abound in this world cruising catamaran 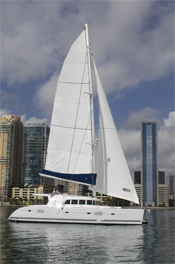 The new Lagoon 500 picks up where the successful Lagoon 440 left off, blending innovation and quality in equal parts. The 500 is truly impressive. From the unique flybridge steering station to the nifty rumble seat cockpit forward to the stunning interior finished in mukali wood, the Lagoon 500 leaves an indelible impression. Designers Marc Van Peteghem and Vincent Lauriot Prevost were given a challenging assignment by the Lagoon management team: Design a catamaran for world cruising that includes just about everything you'd want or need at home. That's right, home; the design premise of the Lagoon 500 was to make the boat as much like a house as possible-albeit a house that can sail at double-digit speeds.

Founded in 1984, Lagoon calls itself determinedly forward looking. It launched its 1,000th boat last year and continues with strong sales this year. According to U.S. Sales Director Nick Harvey, the company hopes to sell 200 boats worldwide in 2006, with 25 percent of those in the United States. And it's well on its way. We sailed hull No. 2 of the Lagoon 500 after the Miami Boat Show in February, but orders for the first 30 boats were already on the books.

The details
The 500's LOA is 51 feet with a LWL of 49 feet. The beam is 28 feet, which translates into a lot of square footage both above and belowdecks. The overall displacement of 41,005 pounds gives the Lagoon 500 a sense of presence in the water and the generous 1,722 square feet of working sail area provides plenty of horsepower. Our test boat had two 75-horsepower four-cylinder Yanmar diesels and steaming away from the marina we hurried along at 9-plus knots without pushing. The 500 features Lagoon's innovative gull-wing bridgedeck design, that improves clearance and makes the hulls more efficient in the water.

From the waterline down, and at the turn of the deck, the hulls are solid fiberglass, vacuum bagged with vinylester resin. The hull sides, topsides and the bridgedeck are a sandwich construction with balsa coring. This is an intelligent way to marry strength where you need it with the weight savings that make a catamaran what it is. The twin rudders are foam-cored covered with vinylester resin. The rudder stocks are carbon fiber and the steering system is cable. A variety of molds are used in the construction process but there is also some old-fashioned workmanship. The primary bulkheads are securely tabbed to the hulls and furniture facings. Lagoon's fiberglass sculpting is superb. I like the two steps scooped out amidships below the lifeline gates to make for easier boarding when side tied. The 500 is loaded with small innovations make the boat wonderfully user friendly.

On deck
The 500 includes an elegant aft cockpit for lounging. In many ways the cockpit seems like an extension of the saloon. The steering station is above; a flybridge built into what is a robust cockpit hardtop. You access the steering station via curved steps on either side of the cabintop. There is a surprising amount of room with seating for six. Not surprisingly the visibility is terrific. In fact, it's a bit unsettling at first. With the foldaway bimini top down, we had a bird's eye view of the set of the sails and the Miami skyline.

The sail controls are actually easier to reach from the flybridge than from a standard lower cockpit catamaran. When flying either the drifter or the genoa on a reach, the sheets are led aft to turning blocks, then directed up and inboard to the winches. For windward work there are inboard tracks on the coachroof. The mainsheet traveler is on the aft end of the flybridge, and supported from below by two stainless steel compression posts. The main halyard is led to a standard electric winch just to the right of the helm and the sheet is opposite. By any definition the Lagoon 500 is a big boat but it is also an easy boat to sail.

Climbing down from the helm, you make your way forward on very wide side decks. The diamond nonskid pattern offers good traction and the stainless steel handholds on the coachroof can be reached without bending over-they're chest height. The hatches are recessed so you won't stub your toes. The rumble seat forward is a nice touch and so are the teak seats on each bow pulpit. The anchor rode is channeled to the vertical windlass and large chain locker just forward of the rumble seat. The mast stretches 72 feet above the water. Fractionally rigged, the Lagoon 500 has a versatile sailplan that includes double headsails. The innerstay hosts a flat-cut furling genoa and a lightweight furling drifter for downwind and light air work is flown from the outer stay. One of the advantages of a 28-foot beam is the wide sheeting angles and a pole is not usually necessary when reaching.

The aft cockpit features face-to-face seating with a bracket for a large, handsome teak table. The table is ingeniously stored in an aircraft style locker above. A sliding companionway door and sliding windows in the bulkhead help incorporate the cockpit into the saloon area. The wide swim platforms in each hull are easily accessed from the cockpit via two shallow steps. The steps have lazarettes for stowing snorkel and dive gear and there is a hot water shower on the port hull. You never feel like you're climbing in or out of the cockpit, the entry points are well designed. Three generous-sized lockers accommodate gear along the aft crossmember and there is additional storage under the seat benches. There is a wet bar to port, just before you enter the saloon that includes a sink, pressure water and 12-volt fridge.

Down below
Stepping, not dropping, into the saloon you are immediately struck by the sense of light and spaciousness. Our test boat was elegantly finished in honey-colored mukali wood. The trademark Lagoon shiplike portlights provide natural light and along with the four forwardmost opening portlights, plenty of ventilation too. The expansive galley is to port. I prefer the galley up, in the saloon as opposed to down in one of the hulls. The 500's galley is a split-level compromise that works well. A four-burner stove, double stainless sinks with an extra drying sink and large 12-volt fridge are standard. I like the stainless steel counter surface. Storage is primarily under the counter tops and below the floorboards. You could stash enough provisions for an Atlantic crossing under the sole alone.

The forward-facing nav station, looking out through the portlights, is my favorite feature. Often overlooked in today's catamaran designs, the 500's nav station is where you'd likely find me while underway. There are panels for instrument repeaters and a shallow chart drawer. There is a huge L-shaped settee and table arrangement to starboard. Eight people can sit comfortably for dinner. The large cabinet against the mast bulkhead is designed for an entertainment center. In the four-cabin charter version of the Lagoon 500, there is an additional companionway forward of the settee for access to the forward hull cabin.

While the saloon is essentially the same on all models, there are three different cabin arrangements to choose from. Our test boat was fitted with the three-cabin owner's model. Other options include a four-cabin owner's model and a four-cabin charter model. The port hull is the same on all three versions. It includes an aft cabin with a queen berth accessible from three sides, lockers and drawers below and headboard shelves. The aft cabin head includes a varnished wood countertop, stainless sink and separate shower stall tucked away along the outside of the hull. A 12-volt freezer and a locker for an optional washer and dryer are located in the portside gangway.

The port forward cabin also houses a queen berth, cleverly oriented athwartships to provide three-way access. There is a large hanging locker, lockers below the berth and shelves above. The head is forward, and like the aft cabin head, includes a varnished countertop and separate stall shower. Opening portlights and a large deck hatch that has a screen and shade built in provides excellent ventilation.

The three-cabin owner's version devotes the entire starboard hull to a single stateroom. The queen berth is aft, with a dressing seat to starboard and lovely bureau opposite. There is a huge hanging locker and plenty of room to change clothes. There is a large settee for relaxing and storage for more clothes than I own. The head is grand, and the shower stall rivals anything you'd find ashore. There is that concept again, home-like. From little touches like light switches, to logical electrical connections in each cabin, the Lagoon 500 has been designed to be your home, as well as your boat. Lagoon knows who its customers are. He or she may well be a new sailor who wants to plunge into serious cruising without sacrificing the comforts of home. They may be operating a business from afar or using the boat as an elegant, floating vacation home.

The systems are well thought out and Lagoon's engineering is always first rate. The standard electrical system includes three large house batteries and one emergency battery. The plug-and-play system is a new concept of electrical distribution with localized junction boxes designed to make tracking problems simple. Simple is the key word. Instead of a massive and confusing panel that looks like it should be on the space shuttle, the 500 features a DC panel controlled with three switches. There are four rotomolded plastic water tanks for a total of 254 gallons. Most boats will have a watermaker fitted and there is also plenty of room for an optional generator.

The engines are accessed from lockers in the aft hulls. Two 55-horsepower Volvo diesels with saildrive transmissions are standard. Three-bladed fixed props are standard. The lockers are very well insulated, and even from below in the aft cabins it's hard to hear the engines running. Four fuel tanks combine for a 250-gallon capacity, translating into a 1,000-mile range
under power.

Under sail
Back on the Biscayne Bay, we hoisted up the full-batten main and unfurled the genoa. Unfortunately the wind was light. However, light air can often be a more revealing test of a boat's capabilities. Contrary to what many sailors believe, a lot of cruising cats perform poorly in light air. Well, don't put the Lagoon 500 on that list. With a true wind at less than 10 knots, we found our stride sailing upwind at more than 6 knots. A little bit of tweaking soon had us approaching 7. It felt like we were on an escalator, there was virtually no motion; it was the easiest 7 knots I have ever experienced. Tacking in light air required backing the headsail before releasing the sheet but the acceleration was impressive. Cracking off on a reach, I gave up the helm and made my way to the rumble seat forward. What a view, what a life. It sure would have been nice to accompany the crew to the Bahamas, where they had a photo shoot scheduled.