Designed with French flair and a mindful eye to easy sailing, this new Beneteau is ready for serious cruising 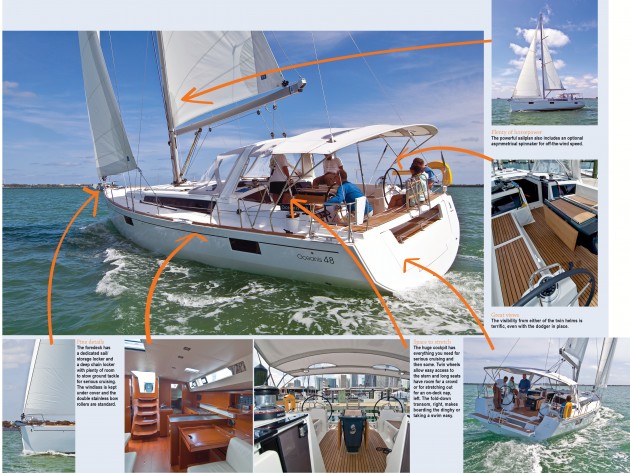 The new Beneteau Oceanis 48 blends fresh thinking, French design flare and, most importantly, proven Beneteau engineering. And judging from a personal survey last summer, when I observed a bevy of new Oceanis 48s in marinas all around the Mediterranean, the world's largest sailboat consortium has done it again and launched another winner. And it's easy to see why: The Oceanis 48 appeals on many levels and is clearly the look of sailing's future.

The hull and deck, designed by the legendary team of Jean Berret and Oliver Racoupeau, emphasizes a well-balanced and stable hull form that performs well both on and off the wind. The comfortable cockpit provides easy access to the water and the large companionway and multitude of hatches create a natural flow of light and air below. The interior, designed by the Nauta Design Group, is available in a variety of arrangements and the appointments are beautifully executed. The Oceanis 48 blends the ergonomic advances stemming from multihull designs with the reassurance and the lively sailing characteristics that only a monohull can deliver.

Following the trend established by the Oceanis 41 and 45 models, the 48 includes a chine that rakes aft well above the waterline that not only serves to keep the boat a bit flatter under sail, but adds interior volume to what is already a very beamy, voluminous hull. I also like the look as the chine breaks up the freeboard and gives the boat a lean, sleek bearing in the water. This is a remarkably wide boat with a beam-to-length ratio of 3:1, and the beam is carried all the way aft, maximizing its effect. The open cockpit layout adds to the sense that the boat is a bit of a hybrid, a cross between a monohull and a catamaran; a monomaran if you will, as the Beneteau representative aboard phrased it.

We test sailed the new Oceanis 48 on Biscayne Bay after the Strictly Sail Miami boat show. The weather was unusually mild for February and the protected Bay waters were sadly unruffled. In short, it was calm. Still, with persistence and by chasing some wind lines with timely boosts of the 75-horsepower Yanmar diesel, we managed to find some breeze and test the boat on most points of sail. 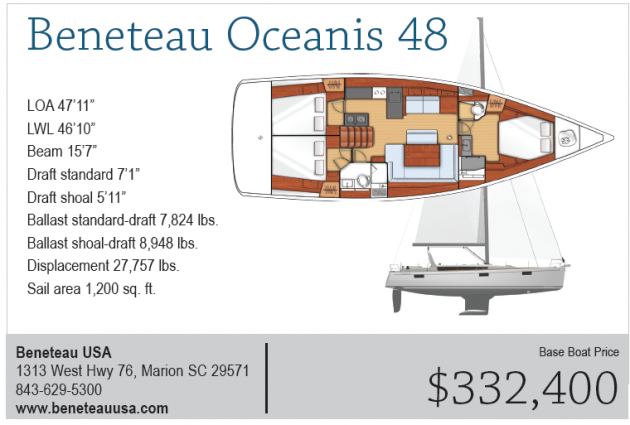 The cockpit is huge, making it feel like you're aboard a much bigger boat, and the twin-wheel design adds to the openness. A large centerline table includes an icebox, robust stainless grabrails and houses a multifunction display visible from both helms. There are decent sized lockers and dedicated compartments in the sole for propane and the liferaft. The signature feature is the electric fold-down transom that ingeniously opens and lifts the transom creating a large stern step in one motion. With a properly mounted ladder, this is about the best swimming platform I've seen on a sailboat, and it's also ideal for boarding from tenders. In the up mode, it serves as a seat for both helms and a reassuring bridge from an otherwise open cockpit.

All sail controls are led aft to the cockpit, neatly run along the cabintrunk to a pod of clutches and with a single winch per side. Electric winches are a popular option. The mainsheet is led to a sleek arch that is also used as a support for the dodger and bimini. The sheet runs through two blocks on the arch. These fixed points are in lieu of a traveler, but are not as effective controlling the boom as a traveler would be. Moving the mainsheet overhead certainly cleans up the cockpit, offers end-boom sheeting and is, in some ways, safer. The genoa sheet winches are located just forward and outboard of each helm station, easy to reach and operate, especially when they're powered up. The visibility from either helm is excellent, with fair sightlines on both tacks.

The side decks are wide and easy to navigate, and teak is a handsome option. Handrails along the cabintrunk are a bit low, but the molded nonskid is excellent. The rig is serious: the air draft is just a pinch under 70 feet and total sail area with the 105% genoa is 1,206 square feet. Our test boat was fitted with an in-mast furling mainsail. The optional asymmetrical spinnaker adds another 1,400 square feet to the sailplan. That's a lot of horsepower, but the Oceanis is a big boat with a displacement of 29,313 pounds. I really like the dedicated sail storage locker forward. The chain locker is deep and there's plenty of room to stow ground tackle for serious cruising. The windlass is kept under cover and double stainless bow rollers are standard.

Down below
The Oceanis 48 has four different interior layouts, featuring two-, three-, four- and even five-cabin family plans. Our test boat was the three-cabin model, with two double berths aft and a luxurious forward cabin. I suspect this will be the most popular arrangement, and boats stuffed with more cabins will be destined for the charter fleets. The interior appointments are nicely executed, and the teak trim lends an elegance and perfect contrast to what is, in every other respect, a thoroughly modern interior.

Dropping below, the galley is to port with the double sinks tucked next to the companionway and well positioned near the centerline. Cabinets above the stove, drawers below and the front-opening fridge are finished in a flat teak that gives the boat a spare, European aura. There's adequate counter space, and the fiddles are very useful. A large head with a separate shower is opposite the galley.

The saloon is incredibly bright and open with a white main bulkhead and headliner, and plenty of overhead hatches. The table is to starboard with a U-shaped settee draped around it. A free-floating bench adds more seating. Two seats-a loveseat of sorts-are opposite and quite comfortable for lounging. Storage is in lockers above and compartments below the seats. There's not much of a sea berth, but that's a minor quibble in a boat with three private cabins.

The two aft cabins each host a double berth and hanging locker. What I like is that they're not dark, forgotten caves. Hull portlights and opening ports and hatches keep the light and air flowing. The forward stateroom is stunning. There's the de rigueur centerline double berth and a hanging locker to starboard. There's also a dressing seat, a sink and a vanity and large shower with a transparent door.

The Oceanis is fitted with a Yanmar 75-horsepower diesel and a saildrive transmission allowing for the optional pod control, the Dock-n-Go system that Beneteau introduced a few years ago in
dramatic fashion at the U.S. Sailboat Show in Annapolis, Maryland. Access to the engine is more than adequate and the fuel capacity is 106 gallons. Water capacity is 182 gallons in two tanks.
Under sail

Back on the bay, we finally found a decent breeze and switched off the engine. Sailing upwind we inched over 6 knots in 10 knots apparent and the steering was tight. I liked the responsiveness of the rudder. There was no tendency to wander as is sometimes the case with big cruisers. Cracking off the wind, we toyed with 7 knots until we put the apparent wind aft of the beam. There was not enough wind to reach effectively. So what did we do? We brought the boat back on the wind and spent a pleasant hour tacking around the bay, mindful of the shallows and impressed at how efficiently the Oceanis came through the wind on a series of tacks and jibes.

The Oceanis 48, with its mix of comfort, innovation, ease of handling and good performance is what future cruising boats will all look like. It's not surprising that Beneteau is ahead of this curve, and with its unmatched ability to bring quality boats to the market at a fair price, I suspect it will lead this race for quite awhile. I'm certain that as I sail farther afield in the Med this summer, and then the Caribbean this winter, I'll cross wakes with plenty of new Oceanis 48s.