From thin-water sailing to rough passages, this cruiser delivers 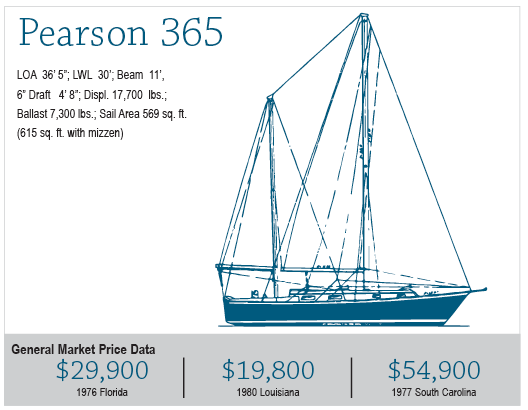 Bill Shaw had a practical appreciation for sailboats, designing boats with traditional lines capable of cruising chest-deep coastal waters and crossing the open sea. He began his career working for 12 years alongside legendary naval architect Olin Stephens as part of the team at Sparkman & Stephens in New York. He then joined Pearson Yachts as its chief designer and would ultimately give the recreational sailing world some of its most popular boats, including the Pearson 26, Pearson 30 and the Pearson 365.

"The 365 is my personal idea of what a boat should be," the late Shaw once told colleagues, referring to the Pearson 365 ketch, a 36-footer with shoal-draft keel, masthead rig and skeg-hung rudder. Shaw, who remained at Pearson until 1991 and died in 2006, said a 36-foot hull provided him with room to add luxury features rather than sacrifice them for lack of space or, worse, modify the boat's appearance to accommodate such comforts.
"At that size I can put absolutely everything in the boat that I want and not get into a this or that situation. The split rig makes shortening sail a cinch. The bulwarks make wandering around on deck more comfortable. The fully enclosed shower provides all kinds of niceties," Shaw said.

Between 1976 and 1982, Pearson Yachts built 405 Pearson 365s. Although a few were sloops, cutters or pilothouse models, the vast majority were designed with ketch rigs. Interestingly, the P365 was followed by the Pearson 37, a boat the project team dubbed the condo boat because it had so much space for amenities.

First impressions
Traditional lines, solid construction, roomy 8-foot-long cockpit and walk-around decks are what come to mind when a Pearson 365 pulls alongside the dock. The bow is prettier than the stern, which has the chopped off appearance typical of the late 1970s.

With the exception of toerail, handrails and coamings, there isn't a lot of wood trim on deck. The boat is beamy, suggesting plenty of interior space. The masts aren't too tall, so the boat can clear bridges where other yachts of the same size might not. However, the ketch rig can translate to additional maintenance because two masts and two booms are more responsibility. On the up side, the rig allows use of multiple, smaller sails that should be easier to tame.

Construction
The Pearson 365 benefits from the materials of the day, including near impervious hand-laid-up fiberglass that ensured the hull and deck were rugged enough to withstand the elements. The keel is well-ballasted with 7,300 pounds of lead, a material most marine surveyors agree is far superior to iron. The skeg-hung rudder pairs nicely with the shallow keel for maneuverability.

Thanks to the shape and thickness of the hull, owners contend the yacht could easily withstand a minor impact. A solid bulkhead separates the cabin from the engine area aft, providing noise reduction and a measure of safety. The P365 hull is solid fiberglass and built with a liner that provides some insulation but can complicate hull repairs and make it more difficult to find leaks. The deck, coachroof and hatches are a sandwich of balsa between fiberglass. The hull-to-deck joints have raised some concerns because screws rather than bolts were used to make the connection. The tabbing is glassed over for additional strength.

Although Pearson-built yachts of this age are respected for their soundness, some owners contend the finish work leaves something to be desired. Drew Sorrell, an owner in South Carolina, described facing "crooked corners, jagged fiberglass edges and open-top bulkheads" during a major refit, but found no fault with the hull and deck lay-up. He eventually completed a 21-day, 3,000-mile Pacific crossing.

What to look for
Several owners have found fault with the way portals and hatches are installed, again with screws instead of bolts. The hatches can get spongy and the portals lose their watertightness. The deck is cored so delamination from water infiltration is always a possibility.

Owner Hank Toft noted the steel plate where the main mast steps to the keel tends to corrode from immersion in standing sea water, further resulting in deterioration at the bottom of the aluminum mast. Toft solved the problem by cutting 4 inches off the mast bottom and stepped it on a raised platform above the undrained water.

The 50-gallon steel fuel tank also has been known to rust and weaken. Toft replaced his with two 20-gallon stainless steel tanks. The procedure required removing the engine, which can be hoisted using the main boom and guided up though the companionway.

On deck
The cockpit is 8 feet long and big enough for a crew of seven. The two cockpit drains are relatively small, prompting some owners to install two additional drains or enlarge the originals for fear a wave over the side might swamp the boat.
The decks are wide, making it safe and easy to walk around. Dorades and ventilation hatches channel fresh air below. Tall coamings define the cockpit and afford protection from the elements, as does the canvas dodger.

The helm station allows adequate forward sight lines, although the mizzen mast obstructs the view. The shrouds fasten near the toerail so there's no need to lean precariously around them when going forward for a sail change. A locker secures the alcohol fuel or propane tanks. Two cockpit lockers hold sail bags and other bulky gear. Owners report the cockpit lockers can leak.

Down below
The saloon has 6 feet 3 inches of headroom. Features include a nav station with chart table, a hanging locker, twin settees for sleeping four persons, and a cabin with V-berth forward for two others. A galley near the companionway is fitted with a two-burner stove and oven, single-basin stainless steel sink, icebox, cabinet storage and adequate counter space.

The head has a sink, toilet and separate shower stall. The freshwater tank holds 150 gallons. A hot water heater makes the shower more inviting. The bulkheads and sole are white, with wooden inspection plates.

Engine
The Pearson 365 was fitted with a 42-horsepower diesel engine paired with a 50-gallon fuel tank. The engine model was a marinized Westerbeke, powerful enough to move the hull in most sea conditions. However, maintenance has proved a challenge due to cumbersome engine compartment access.

Underway
Owners tend to disagree when it comes to assessing the performance of the Pearson 365. Some claim the boat does not sail to weather and simply cannot point high. Others, like Sorrell, expressed supreme confidence in the boat's abilities in big seas.

"On the Pacific crossing, I averaged 6 to 7 knots, handling the chop well," Toft said.

When discussion turns to bluewater, one group of owners insists the P365 is made for sailing to the Bahamas and Caribbean, but not crossing oceans, while another faction believes that it can passage the Atlantic and Pacific.

Conclusion
The Pearson 365 is an affordable, well-built, rugged cruiser ideal for a couple planning to sail the U.S. coasts, the Bahamas and the Caribbean where its shoal-draft keel makes possible exploration of coves and inlets dotted with coral heads.

DESIGN QUALITY: The boat was designed by Bill Shaw primarily as a masthead ketch with fin keel and skeg-hung rudder. Shaw, who previously worked with Olin Stephens as part of the design team at the Sparkman & Stephens offices in New York, was keen on producing a roomy, shoal-draft yacht with both traditional good looks and agreeable sailing capabilities.

CONSTRUCTION QUALITY: The hull was constructed of hand-laid fiberglass with lead ballast. Approximately 405 Pearson 365 sloops and ketches were built between 1976 and 1982 under the watchful eyes of the company's quality control staff. Most of the yachts have withstood the passage of time with little need for major structural repair.

SAFETY: Differences of opinion arise over whether the P365 is a yacht made for bluewater sailing. Its large cockpit can be slow to drain. Some sailors swear by its capabilities in big seas, including one owner who took his ketch across the Pacific without incident.

TYPICAL CONDITION: Most owners report the average Pearson 365 on the market is in good to excellent condition. In most instances, communication and navigation electronics have been upgraded.

REFITTING: Some owners have replaced the Westerbeke engine with a Yanmar. The base of the mast and the steel fuel tanks may need replacing.

SUPPORT: Pearson owners have an active online presence through associations and forums. Information and assistance is available at www.cruisersforum.com and the P365 owners group at www.pearson365.com.

AVAILABILITY: Since approximately 405 Pearson 365s were built, there's no shortage on the used boat marketplace.

INVESTMENT AND RESALE: These boats tend to sell faster than some other yachts of the same vintage and size. More than 30 years has elapsed since most were built, and depreciation has run its course. Yet it remains a solidly constructed boat that is still in demand.