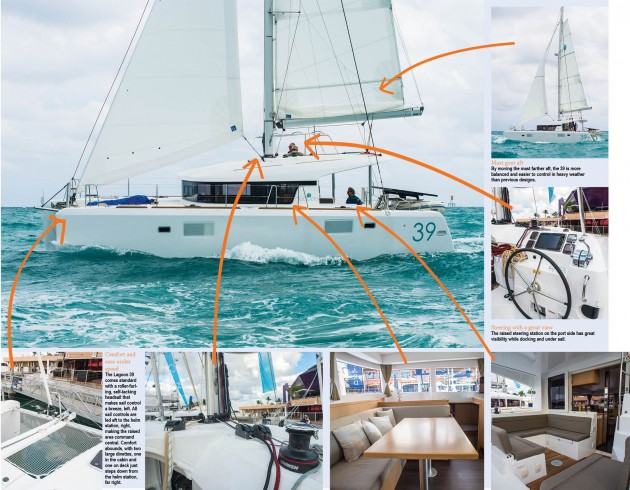 Some might question why the brain trust at Lagoon would decide to build a new model that at first glance seems to compete with one of the most successful offshore catamarans of all time, the Lagoon 380, which is fast approaching hull No. 700. A closer inspection provides the answer: The new Lagoon 39 represents a fresh design approach for offshore sailing and provides intriguing options that neither the Lagoon 3800 or 400S2 offer. The design crew at VPLP has come up with a host of innovations that make the 39 a serious cruising machine, especially the new rig arrangement.

I really like the idea of moving the mast farther aft and reducing the size of the mainsail. It may seem like a subtle change but it fundamentally alters the way the Lagoon 39 is sailed, and that's a good thing. Traditionally, cruising cats have featured small headsails and large, full-roach mainsails that provide most of the horsepower. These rigs can be difficult to control in heavy weather, tend to accentuate pitch, are prone to making leeway and can be challenging to balance. They also limit downwind sailing options. The reality of ocean sailing is that the conditions don't always warrant flying a chute, especially when passagemaking with a small crew. The ability to fly a genoa off the wind, with either a reefed main, or no main, and still make good progress should not be underestimated. But this change is not just about flexibility for off-the-wind sailing. The Lagoon 39 comes standard with a self-tacking jib with the leads mounted on a track forward of the mast, another advantage gained by moving the mast aft. With a high-aspect-ratio mainsail and flat-cut jib, the Lagoon 39 can sail upwind quite efficiently. This arrangement also means that tacking simply involves giving the crew a heads up and turning the wheel. For those who don't want to sacrifice too much mainsail area, a square-top main is an alluring option. With either a standard full-batten main, or square-top main, the air draft is 60 feet 11 inches.

Another interesting design change is the shape of the hulls. Following the lead of the Lagoon 52, the bows are plumb for improved performance. The hulls are also beveled along the hull-to-deck joint, keeping the freeboard moderate and making the boat more visually appealing. There is also a sleek chine in the aft end of the hulls, and Lagoon's patented gull-wing underbody that further reduces pounding. Another feature, also taken from the 52, is the cockpit hardtop that naturally follows the line of the cabintrunk instead of protruding above it, and includes a clever cut-out for the helm station.

We test sailed the 39 on a breezy day off Miami, Florida. The conditions were ideal, with 15 to 20 knots of wind from the east, moderate 4-foot seas, warm and sunny-it was a day made for sailing. We boarded the boat at Miami Beach Marina and were quickly reaching north at 8 knots. 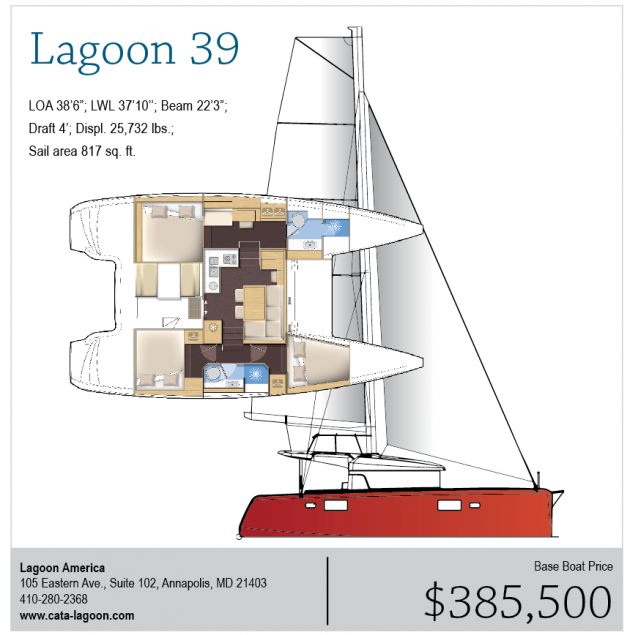 The raised helm station to starboard is the command center for handling the 39. All sail controls, led though clutches, wind up at an electric winch, making the boat easy to handle. The deck organization that allows for the traveler and mainsheet to be efficiently trimmed from this position, which is well forward of the traveler, is quite clever. Not surprisingly, the view from the helm station is excellent, both when sailing and maneuvering under power.

The cockpit is both snug and comfortable, a design feature that's hard to achieve on a cruising cat. The short three-step approach to the helm station takes a bit of getting used to, and those accustomed to cockpits that stretch across the width of the boat will be disappointed. But the cockpit works for serious sailing because of what it isn't, a dance floor. There is direct access to the helm station from the cockpit and the deck. There's a seat to starboard and a U-shaped settee to port with a good-sized table that seats six and can also be removed. The swim steps are wide and uncluttered and equipped with hot and cold-water showers. I particularly like the sensible stainless steel davits set up to accommodate a couple of solar panels without completely enveloping the stern.

The first thing you notice about the sidedecks is that they're wide and easy to navigate. The second thing is that the numerous hatches are all neatly recessed. There's plenty of deck space of course, and lounging on the trampoline or forward pulpit seats is a nice way to watch the ocean roll by. The forward bridgedeck includes two large lockers, one is a chain locker and the other can house a small generator, as was the case on our test boat.

Supporting the mast loads required beefing up the bridgedeck with an infused structural grid tied to lateral stringers in each hull. The overall resin infused construction, with balsa-cored decks and hull sides coupled with solid fiberglass hulls below the waterline, is a sensible and well-proven manufacturing process. The 39 has a very solid feel underway.

The transition from cockpit to saloon is seamless through a wide sliding companionway door. The saloon is bright and airy, a trademark of Nauta Design, the Italian firm that not only works with Lagoon but is famous for designing superyacht interiors. The galley is immediately to port when you step inside. It faces aft and there's a large opening window to facilitate passing plates out to the cockpit. Double sinks, a stovetop with a separate oven below and 12-volt refrigeration are standard.

The navigation station is also to port, facing abeam but with an uncluttered view forward. There is a large chart table with a drawer beneath and plenty of room for electronics. The L-shape settee can accommodate five or six around the table. Natural ventilation is greatly enhanced by two large, forward facing opening hatches.

The Lagoon 39 has four layout plans. The standard interior features two double cabins aft, to port and starboard, with forward heads and showers. An expansion of this plan is the two-cabin premium version for, according to the brochure, "demanding" owners. This arrangement includes king-sized bunks, a sofa, an extra wide hanging locker and expanded heads and showers forward. Fixed hull windows provide natural light in each hull although I confess I am a bit wary of these sidelights for offshore sailing.

A three-cabin family model includes a king cabin to port with a large head and shower forward and two doubles to starboard with a head between. The last option, which we will soon see in charter fleets, is the typical four -cabin plan with doubles fore and aft in both hulls and the head between. All models include separate stall showers.

Two 20-horsepower Yanmar diesels with saildrive transmissions are standard. Two 100-liter fuel tanks translate into 53 U.S. gallons, and a cruising range of at least 300 miles. There is 79 gallons of fresh water in two tanks.

Out on the ocean, we trimmed the sheets and brought the boat into the wind. I was pleasantly surprised how close we could sail, pinching inside of 50 degrees apparent without losing speed. I was also impressed with the soft ride. The sea was a bit lumpy but the 39 rode easily over the waves without pounding or any hint of pitching. We tacked several times-the self-tacking jib made this an incredibly easy, a one-person job-and gathered way quickly each time. The helm was relatively light and balanced, the sail proportions felt right, and the sailing was natural. I probably shouldn't admit this, but the 39 is a boat that an old monohull sailor like me understands intuitively.

Easing the sheets we sped back toward Government Cut and Miami Beach Marina on a broad reach. Occasionally catching a breaking wave, we hit double digits and it was a nice ride. It would have been nice to set a code zero or asymmetrical sail off the sprit designed just for that purpose, but we were not equipped with either. Back in the channel, we were running late for our next appointment. I pushed the throttles forward and we were soon making 7.5 knots. Bringing the boat alongside the fuel dock I was again reminded how widely spaced twin engines make docking a cinch.

There is little doubt that the Lagoon 39 is poised to follow up on the success of the 3800. This boat appeals on several levels. It is by design intended to be easily and efficiently handled offshore and yet it is still extremely comfortable. It has an array of interior options and quality construction from one of the premier catamaran builders. A new classic has been launched.