The Gunboat 55 takes cruising to a higher level of innovation, speed and elegance 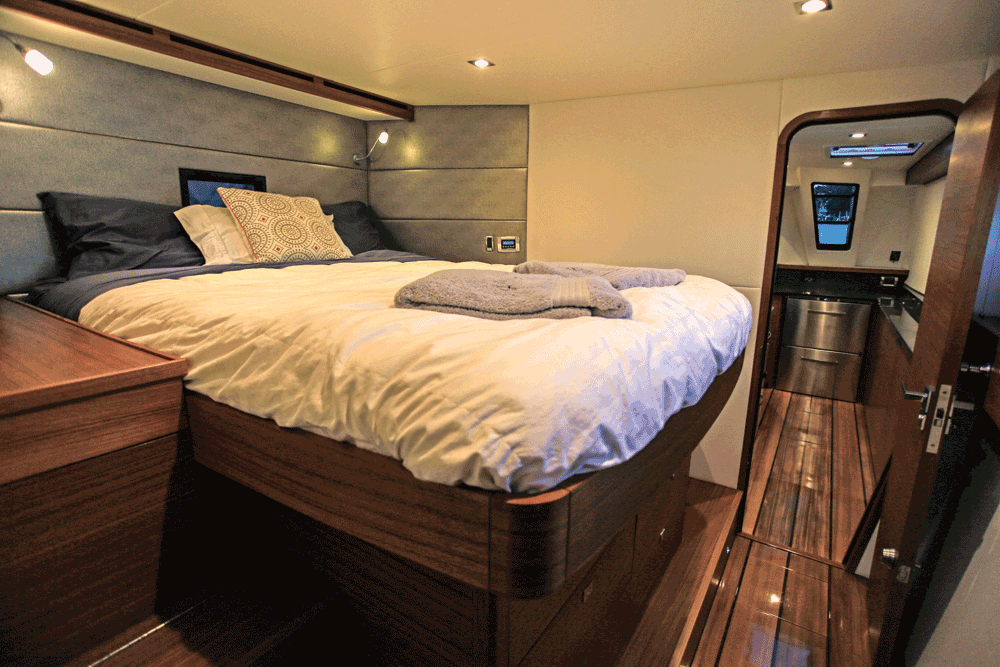 The daybed has storage underneath.
Bob Grieser

Bailet dropped the solent jib and we unfurled the screecher and immediately accelerated. I took the helm as we cracked off the wind. The apparent wind was hovering between 16 and 18 knots and boat speed was not far behind. I noted 15.1, then 15.7, then 16.2 knots and tried to remain calm, as if an old monohull sailor was used to seat belt-wearing speeds. The helm felt a bit stiff but the ride was remarkably smooth. We were sailing on a beam reach and the choppy seas were hardly noticeable. We had the centerboards partially deployed and appeared to be tracking nicely. We eventually furled the big headsail, set the solent jib and beat back toward the harbor. We all know that cruising cats don’t tack well, and sometimes not at all, but that’s not the case with the Gunboat 55. We came through the wind with ease and once the powerful main filled we took off with a vengeance. Tacking is simply a matter of turning the wheel with the self-tacking jib.

The are a lot of control lines led to the helm station and it takes a bit of getting used to what’s what. The line locker rope bins on either side of the helm are essential. The main is controlled by a hydraulic mainsheet and has a quick release to dump it in a sudden blow, an important safety feature for a sail with 1,346 square feet. I reluctantly gave up the helm and moseyed around the “back porch,” as Johnstone called the covered bridgedeck area. I plopped on the sofa and scribbled some notes. I could get used to sailing like this.

In a long career of testing boats for SAILING Magazine, the Gunboat 55 has to rank as one of the most intriguing and surely the fastest boat I’ve sailed. It was also one of the most interesting reviews to write after learning the sad fate of Rainmaker. Looking back at the incident, one can say it was risky to leave port in late January, never a forgiving month in the Atlantic when unpredictable gales rake Cape Hatteras and sweep out to sea. But I am surely not one to judge, having made many risky passages. Rainmaker proved to be an excellent platform in survival conditions, and in the final analysis, boats are replaceable; people are not.

Would I buy a Gunboat 55 for world cruising? You bet, in a heartbeat, it’s just that the entry fee is a bit steep for this humble boat test writer. With a base price of $2.35 million, it obviously will appeal to just a few select sailors. But if you have the resources and a desire to sail the world at speeds most of us can only dream about, the Gunboat 55 deserves a close inspection.