His group has been participating in the BVI Spring Regatta and other events for 13 years.

“It’s a neat thing, to watch folks who have never been on a sailboat before, get involved, get excited. Seeing that teamwork gel is awesome,” Proctor said.

Proctor said they had booked charter boats from The Moorings during the summer of 2017, before the hurricane.

“When the storm hit, we were all emailing each other, wondering how the residents were doing, and what was going to happen to the regatta,” he said. “We made a decision that we were going to come no matter what. And if they didn’t have the regatta, we’d go down there and support them and to do whatever we could to help them rebuild. And we are glad they decided to run it.” 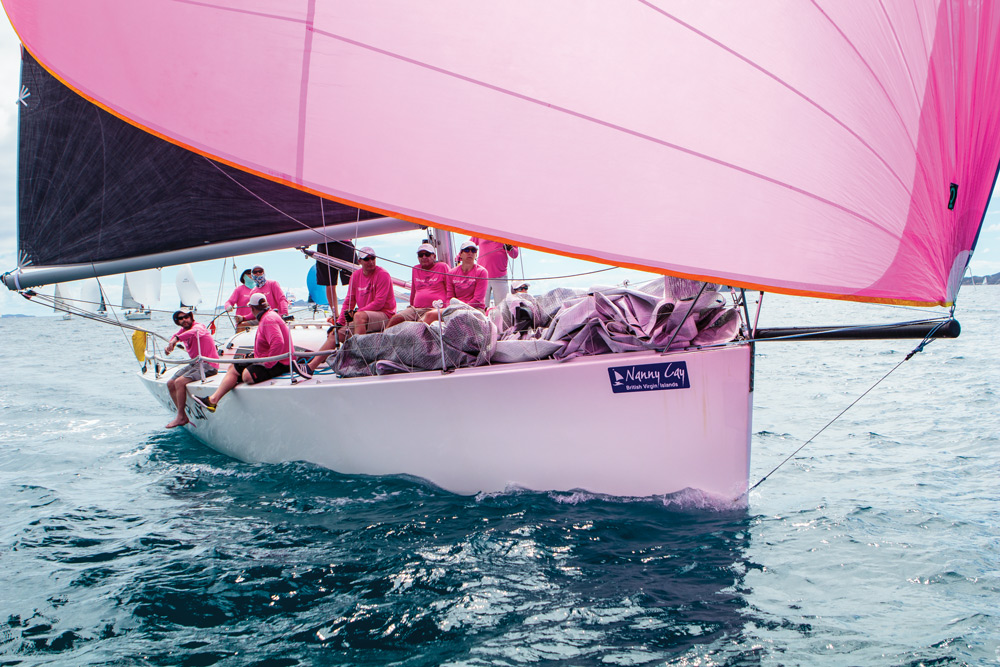 Day One of the regatta dawned bright and breezy, chasing away the preoccupation with the hurricane. Miles of blue water rippled white in the stiff 15- to 20-knot wind. Colorfully dressed sailors raced past on sailboats of all sizes. From a distance, the islands look green and serene. In addition to 22 yachts in the bareboat division, the regatta experienced the phenomenal solidarity and support of sailors from neighboring islands. America’s Cup and Volvo Ocean Race rockstar Shannon Falcone came over from Antigua in his foiling catamaran Falcon. A contingent from Puerto Rico included Luigi and Estela Miranda’s Grand Soleil 52 LC Estela, and Paul Beaudin’s McConagy 38 Dark Star.

“We’re very committed to being here to show solidarity and show up for these races even if there’s just a keg on the beach,” Beaudin said. “As soon as you pull out of Nanny Cay and see where you are sailing, it’s a win-win. We’re excited to be here; if nothing else, we’ll win the party!”

The three-day Spring Regatta had been preceded by the inaugural 165-mile Full Moon Race around the islands, and the Invitational Race. Courses, starting just outside Nanny Cay’s jetty, took sailors on a stirring and scenic tour of islands in conditions that both challenged and wowed competitors, but finished in plenty of time for festivities at the race village. Wrapped in the scent of food stands, with music, dancing, Jumbies and camaraderie, the competitors and volunteers had a ball.

“It’s been a blast,” said Tom Elsen, returning for the fourth year on the Melges 32 Big(gest) Trouble. “I look out on the ocean and think about the tiny fraction of the world that could even imagine getting to do what we are doing, and that is remarkable.” 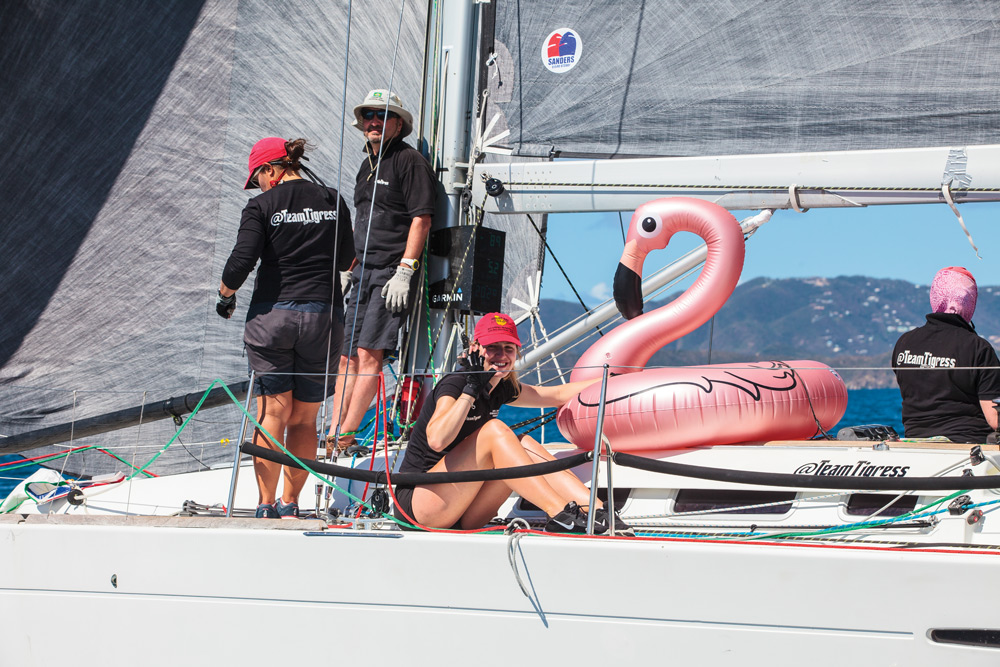 The crew of the First 40 Tigress has some flamingo fun.
Alastair Abrehart photo

“It’s certainly evident, all over this island and others, that there are more important things in the world than sailboat racing. The fact that people are attending to us, helping us enjoy the sport we love, is pretty overwhelming,” Elsen said. “It’s a privilege to be here, and I hope the spirit, and the dollars we bring, continue to help rebuild the island.”

In fact, BVI Gov. Gus Jaspert was on hand at the prizegiving.

And the racers made the most of the event. In the battle of the big cats, Flow surged to the front of the pack, edging out Elvis and Nala. Philippe Moortgat’s Swan 45 Samantaga won CSA 1 by a 12-point margin, while Boogaloo won CSA 2. In addition, Gatos del Sol skipper Robin Tattersall, a popular octogenarian from Tortola, was honored with the Best BVI Boat Award and the International Yacht Club Challenge, earning him a free Sunsail charter boat for next year’s BVI Spring Regatta.