The Beneteau 343 is the latest model from one of the industry's most prolific builder. Conceived as a lively cruiser, the 343 includes design and construction features that we've come to take for granted from Beneteau. The 343 is comfortable on deck and below, it is easy to handle and maintain, and it performs well through a wide range of conditions. When you throw in a base price that hovers just over $100,000 you can add excellent value to the mix of features.

If you want to preview a best seller in the making, take a good look at the pictures on these pages because although our test sail was conducted aboard hull No. 3, it won't be long before Beneteau 343s start turning up in the waters where you sail. Built at Beneteau's South Carolina plant, the 343 is primed for a long and successful production run.

Designed by the team of Berret and Recoupeau, the 343 hull is voluminous, there is plenty of freeboard and wetted surface is kept to a minimum. Beam is moderate but it is carried well aft, indeed maximum beam is somewhere around the companionway. South of the waterline the narrow keel section flares aft along its foot. The standard three-bladed propeller is supported by a molded skeg, and the balanced rudder is placed well aft, providing good steering control, especially when deep reaching.

The standard draft is 4 feet, 9 inches, a deeper 6-foot keel is offered, and soon a retractable shoal keel will be available. If you're looking for a boat with a pronounced sheerline, look elsewhere, because like most new designs, the 343 incorporates a fairly straight run from bow to stern-the look is thoroughly modern. The low-profile cabintrunk softens the lines with a gentle slope forward.

I recently joined David McCallum aboard Healing Time at the Riviera Beach Marina, located just north of Palm Beach, Florida. The boat had just been commissioned and McCallum was still getting familiar with the boat's systems. His old boat, a Beneteau 31, went missing in Hurricane Francis.

"It still hasn't been found," he said sadly, "but this new boat sure helps ease the pain." McCallum spends more time on the water than most. "I am out sailing every week, usually a couple days, sometimes more, I can't get enough of it."

He conducted daysail charters with his old boat, and plans to do the same with the 343. McCallum and his wife also spend a month or so in the Bahamas every summer. McCallum uses the boat exactly the way the designers envisioned, a combination of daysailing and cruising. "What about a little club racing?" I asked him. "No, that's not my thing. I am out to have fun and just enjoy the boat."

We slipped the mooring lines and streamed into the Port of Palm Beach. The three-cylinder 27-horsepower Yanmar provided plenty of punch and we hurried toward the ocean at more than 6 knots.

Once we cleared the first channel marker, we tacked south, paralleling the beach and took advantage of brisk but gusty westerlies. It took seconds to set the roller-furling main and 140-percent genoa. We switched off the diesel and rode the puffs. One minute we eased along in 8 knots apparent with a boat speed of 5 knots and the next we heeled hard to port and accelerated to 7 knots plus, with winds gusting to 18 knots.

The 343 hull is a solid laminate with a structural fiberglass liner glassed in place. It is hard to fault Beneteau's construction techniques; its boats have probably logged more miles than any other builder's and they hold up well.

The bond between the liner and hull is vital and Beneteau uses a proprietary polyester compound that chemically links the parts together. The cast iron keel is bolted externally to the hull and the rudder stock is composite, which is becoming common practice but one I am still wary of. The deck is balsa-cored with solid fiberglass reinforcements located in high load areas. Bulkheads are bonded to the hull and deck through 360 degrees. The hull and deck are laminated together, in lieu of the more common mechanical joint, and the aluminum toerail is bonded and screwed in place.

The 343 cockpit is functional, comfortable and quite spacious. McCallum plans to carry up to six passengers and I don't think he'll have a problem. The wheel is mounted on Beneteau's patented pivoting pedestal that opens up to provide easy access to the swim step. Speaking of the swim step, access is via another patented design, the swiveling helmsman's seat that lifts and drops out of the way. In fact, the user-friendly approach to getting in and out of the water was an important selling point for McCallum who often anchors for swimming and snorkeling. 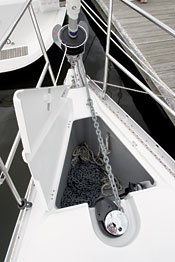 All sail controls are led aft to clutches on the trunkhouse and two Lewmar 30 self-tailing winches handle halyards, lifts and the mainsheet. The primary sheet winches are Lewmar 40s, which seem just a tad undersized, although they're easily reached from the helm. "I really sail by myself most of the time. Even when I have guests, I usually handle the boat." McCallum said. McCallum considered buying a Beneteau 373 but chose the 343 because he felt he could more efficiently singlehand the smaller boat. The cockpit has excellent storage with two lockers, a good-sized lazarette and dedicated LPG locker to port. 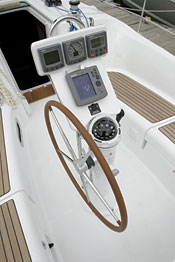 The intricate diamond pattern nonskid offers excellent traction on deck and two teak handholds are well placed on the cabinhouse. I'd like to see two more handholds farther forward. The pulpits, stanchions and double lifelines are well supported. The stainless stemhead fitting includes a single anchor roller. The external opening chain locker is deep, placing the ground tackle where it belongs, low in the hull. An electric windlass was one of the few options that McCallum had installed at the factory.

The deck-stepped roller furling mast is standard and Neil Pryde builds the furling main and 140-percent genoa that also comes standard. Profurl is the choice for the headsail furling system. The rig is fractional but just barely, the designers call it a nine-tenths rig. The single-pod chainplates and genoa tracks are mounted well inboard providing tight sheeting angles. The mainsheet traveler, located forward of the companionway, is quite far forward, and while this midboom sheeting arrangement frees up the cockpit, it does load up the boom.

The interior is bright, courtesy of five overhead hatches, eight opening ports, four hull ports and large skylights in the saloon. Needless to say ventilation is terrific too.

Beneteau's joinerwork proves that a production builder can turn out high quality interiors. The 343 is finished and trimmed in douka, a cousin to mahogany and the varnish has a cherry stain. Beneteau has always paid attention to details, from clever hatch shades to halogen lighting to beautiful upholstery, and the 343 blends a touch of elegance with the practicality of molded liners and floors.

The interior plan works. The L-shaped galley is immediately to port when you drop below. A two-burner gimbaled stove and oven, single sink and large counter top with serious fiddles makes cooking underway possible and downright enjoyable when dockside or at anchor. Storage is provided in lockers behind and above the stove and sink.

The head is opposite the galley. Don't laugh, but this is one of the best features on the 343. The headroom is 6 feet, 6 inches and there's a separate shower, an overhead hatch and an opening portlight. It is perfectly positioned to double as a wet locker too.

The aft cabin features a huge double bunk, a hanging locker, shelves along the hull and impressive headroom-you don't need to stoop to move about. There is also access to the starboard cockpit locker, the steering system and the back end of the engine, including the shaft and stuffing box. Two opening ports, one aft and one into the cockpit, and an overhead hatch keep the air moving. The forward cabin includes a decent sized V-berth, a hanging locker and small shelves along the hull.

The saloon has opposing settees with a handsome drop-leaf table between. Technically the port side is the dinette, although with the table leaves extended, six can sit around the table comfortably. There is storage beneath both settees and shelves behind. The 343 interior maximizes the beam resulting in a sense of spaciousness at the expense of deep storage lockers.

The skylights, or, as Beneteau calls them, panoramic windows, flood the saloon with light. Wooden handrails in the headliner lend security when underway. I like the fact that Berret-Racoupeau included a nav station that uses the aft end of the starboard settee for a seat. At a recent boat show I had a prominent member of the design community assure me that nav stations in small boats were passé because instruments are better positioned at the helm. I disagree. I like to be out of the elements and away from the crowd. I can sit below and putz around with charts, plotters and dividers.

Access to the Yanmar is from behind the companionway and from the aft cabin. I dropped below while we were motoring and I was impressed by the lack of noise. A poly plastic 19-gallon fuel tank seems a bit on the small side but this is a fuel-efficient engine. McCallum upgraded the standard electrical system by adding an additional
house battery.

Out on the water I conned the boat to windward as McCallum trimmed the sheets. The performance was impressive. Although the new instruments were proving unreliable, it was obvious that our boat speed was good. The helm was light despite being over canvassed at times with the big genny and we had a lot of power to punch through the chop.

Easing off, the boat flattened out and the helm was nicely balanced. Falling off onto a deep reach McCallum and I both noted that this rare west wind would be ideal for crossing the Gulf Stream and heading for the islands. He filled me in on his summer plans, which he hoped would take Healing Time to the beautiful Exumas in the Bahamas.

Coming about the wind picked up and we charged back toward the inlet on a close reach. Sitting in the cockpit McCallum smiled and surveyed his boat with a look of pure contentment. What more can you ask for in a boat?