New York Yacht Club's new one-design may have cruising amenities belowdecks, but all the fun is found topsides 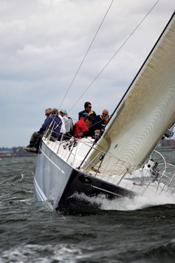 An October cold front exhaled 25 knots with stronger gusts across Rhode Island's Narragansett Bay but nobody aboard the Nautor's Club Swan 42 seemed to mind. In fact, the crew was grinning like a bunch of 10-year-old boys. This was, after all, one of those yee-hah, look-at-her-go kind of sails when the goal is simply to experience how a new boat handles the sea.

Appropriately named, Conspiracy is the first off the line of what will be the latest one-design class of competitive boat created by the New York Yacht Club. A total of 25 are on order by club members and 17 more by other sailors, so craftsmen at the Nautor's Swan boatyard in Pietesaari, Finland, will have plenty to keep them busy over the next few years.

Although the CS 42 has been described by her maker as a club racer-cruiser with adequate amenities for weekend adventures and sleeping aboard, make no mistake, she's a thoroughbred meant for dashing through the waves, not hanging on the hook. To paraphrase the great writer Gertrude Stein, rose is a rose is a rose, by any other name, and this one is a race boat.

Our test sail from the Newport Shipyard in the region's yachting capital was conducted the day before the New York Y. C. officially launched Conspiracy Hull No. 1 from its docks at well-groomed Harbour Court, about a mile away. On the day we sailed, there was no fanfare or marketing hoopla, just sailors spread across the open cockpit, scampering on deck or hanging over the rails. Among them were co-owner David Elwell Jr., rear commodore of the yacht club; sail expert Steve Benjamin from North Sails; Enrico Chieffi, a Star-class world champion racer and now vice president of marketing and sales for the Nautor group; Steve Barker from the Swan sales office; consultant Whitey Russell who helped commission the boat; and a sprinkling of New York Y.C. members awaiting delivery of their own CS 42s, including Preston Hutchings of Bermuda, Scott Dinhofer of Chappaqua, New York, and Paul Zabetakis of Jamestown, Rhode Island, the class secretary.

In spring 2005, New York Y.C. decided to commission the design of a new class of racer-cruisers that would be fast and able, with all the latest technology, yet not so expensive that only a handful of members would purchase them. Several design firms were asked to compete.

"This is the ninth class of one-designs that we've created since 1900 and it's a traditional Corinthian-class boat that you can race but also take cruising."

Although boats such as the Farr 40 and the Mumm 36 are commendable one-design vessels, as is the Swan 45, none were precisely what Elwell and others had in mind. As he put it, "We needed a boat that dovetails with the club's direction toward the IRC rules. Lots of people like me love the competition of the Farr 40s, but we also wanted something that a couple could realistically cruise with a family. Once you get over 50 feet, that becomes very difficult. So we decided to have something in the low 40s."

The specs went out and about eight design firms responded. The parameters encompassed not only beauty, ease of handling, and size, but also price.

"Swan came to the club after they heard about the competition. Whoever was going to do it had to come up with a boat you could put on the starting line for about $500,000," Elwell explained as he inspected the boat at the dock. "We really wanted a new class and that's what we've got, the New York Yacht Club Swan 42. It's a fresh start."

The CS 42, designed by the German Frers team, is actually 42 feet, 6 inches overall and 37 at the waterline, with a beam just shy of 13 feet. Her price tag, at least for Conspiracy: $625,000 at the starting line, Elwell said.
"There's less teak belowdecks and a number of other compromises, but this way we can get 25 members to buy them instead of maybe eight or 10 if the price were higher," Elwell said. "More boats on the starting line makes for more exciting racing."

As we chugged out of the harbor that afternoon under bare poles toward the Newport Bridge, Benjamin repeatedly gauged and tuned the standing rigging tension, knowing he would soon be monitoring the curvature of the laminated 3DL sails.

With Elwell at one of two helm stations in the spacious cockpit, Conspiracy sliced through the chop with ease, powered by the 40-horsepower Volvo Penta engine until everyone aboard was settled and the iron lung was silenced. We raised the sails in the lee of the Norwegian Something-or-other, one of the many Love Boat-style cruise ships that put into Newport these days, dispatching tourists who hurriedly buy a T-shirt before returning aboard pod-like lifeboats that function as water taxis.

From that point on, the would-be CS 42 owners took turns driving, amateur sailors nearly all learning immediately that this boat is nimble and sensitive, and that an over-reactive skipper can put her into a tailspin. Everyone sailed competently, although the task was difficult because the Love Boat taxis twice ignored our right-of-way as a sailing vessel. Cutting across our bow, the coxswains waved and smiled. Luckily, the CS 42 was made to turn quickly.

The stylish Frers hull features a composite construction, leading to its light displacement, less than 14,000 pounds, and nearly half that is ballast. The design incorporates a T-shaped bulb keel and spade rudder, giving the boat a nice balance. The deep-draft model draws 8.8 feet, the shallower version 6.6 feet. A carbon fiber mast with twin swept spreaders is paired with an aluminum boom, the latter a cost-cutting measure.

Below deck the atmosphere is spartan but with an airy, contemporary feel-white bulkheads, little woodwork, a modest L-shaped galley, small head with no shower, a dinette table with twin wings flanked by settees, adequate lights and portals, bamboo floor, a V-berth forward with two smaller aft cabins and a wet locker. A two-cabin model is also available.

The navigation station has abundant space for opening charts. The chart table features a storage drawer for small electronic devices or plotting tools, and additional shelving for systems manuals or rolled charts. Access to the engine, beneath the companionway, is well thought out. Sailors looking for a microwave, blender or sophisticated entertainment system won't find it here. This is a sailboat, not a Winnebago.

On the lily-white deck, with white binnacle and white steering wheels, the angles are that of a racing machine, with control lines running either below deck or to clutches mounted atop the cabin, all within reach of the cockpit. Beefy stainless-steel stanchions, shiny and precisely welded, support double lifelines that don't detract from the boat's racy sheer. The headsail furling drum is flush with the deck, as is the hatch for ground tackle, further enhancing the uncluttered appearance. The furler controls a 104-percent foresail that, according to Benjamin, was the maximum size possible while still keeping the sail forward of the spreaders.

The mainsheet, too, is under the deck, running to port and starboard winches and feeding a track bolted to the cockpit sole, just forward and within easy reach of the double helms.

"The steering design works for me," said Dinhofer, who currently owns a J/44. "My kids like to run back and forth. If this had one big wheel the kids would have to go around the outside of it. This way, they can come straight down the middle. Some wheels are so big they require a trough in the cockpit sole while the top bumps the boom. This is a better design."

Hutchings, who plans to keep the boat in Bermuda, agreed. "From either side I can see what's happening," he said. "I like that."

The electronic gauges are bolted to the mast, so those with poor eyesight could be prompted toward squinting. A larger display might be better suited to the deck layout.

The 42's retractable carbon fiber bowsprit, functioning much like those aboard the J/105, accommodates asymmetrical spinnakers for one-design racing, and traditional spinnakers can be flown from a traditional pole for non-one-design events.

Although there was plenty of talk aboard about the boat's dual purpose as racer and cruiser, most of the conversation concerned how the 42-footers would perform when matched against each other, and how excitement would build as the class association grows and is adopted by clubs worldwide.

"Tell me if I'm hogging the helm. I'm down on the list so I won't get my boat until next year. I've got to get some time in now," said Dinhofer, who didn't have to wait long before Zabetakis, who purchased Hull No. 5, eagerly took his place.

And that's how it went throughout the afternoon. Some skippers liked the canted footrests molded into the deck near the helm, which give the driver a stable platform for one foot when the boat is heeled. Others thought the footrests not big enough. Conspicuously absent was any discussion of engine horsepower, fuel and water tank capacities, or whether the galley had enough stowage for pots and pans. Those details just didn't seem to matter.