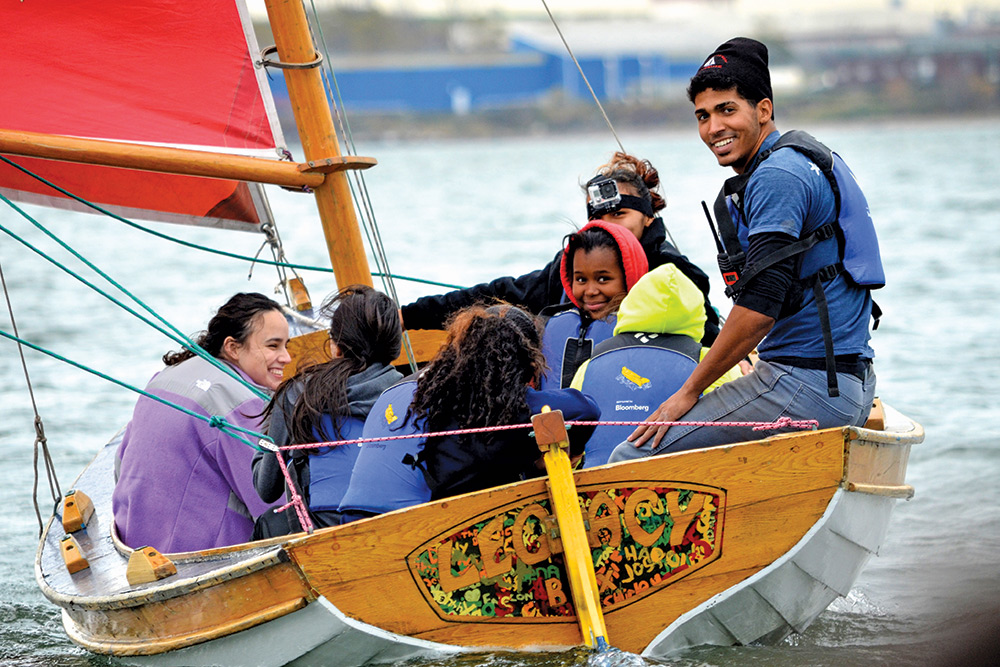 People sail for many reasons. They spend time on the water to make memories with family and friends, to enjoy leisurely vacation days in far-off ports, to savor the thrill of competition, and even to forge careers.

There are some, however, who look at sailing differently. In their hands, sailing becomes an agent of meaningful, lasting change, helping to create better lives for those who are struggling.

Carlos Duran is one of those agents of change. He is the sailing student program director for Rocking the Boat, a Bronx, New York-based nonprofit organization where at-risk young people build wooden boats, learn to row and sail, and help restore local urban waterways. Rocking the Boat welcomes roughly 5,000 children each year, and of these, about 200 are regular participants in intensive, high-impact programs.

Duran was born and raised in the Dominican Republic, a Caribbean island nation with plenty of water but not a lot of opportunity for young people to enjoy it.

“My family was very poor,” he said. “I never learned to swim. We went to the beach now and then, but it was rare, and I never went out on a boat.”

Duran lived with his carpenter father, three older brothers and two younger sisters. His mother lived in the United States, where she was working hard to earn enough money to bring the family to the land of opportunity.

“She left when I was little,” Duran said. “I didn’t even remember what she looked like. Then, when I was 14, she was able to bring us all here.” 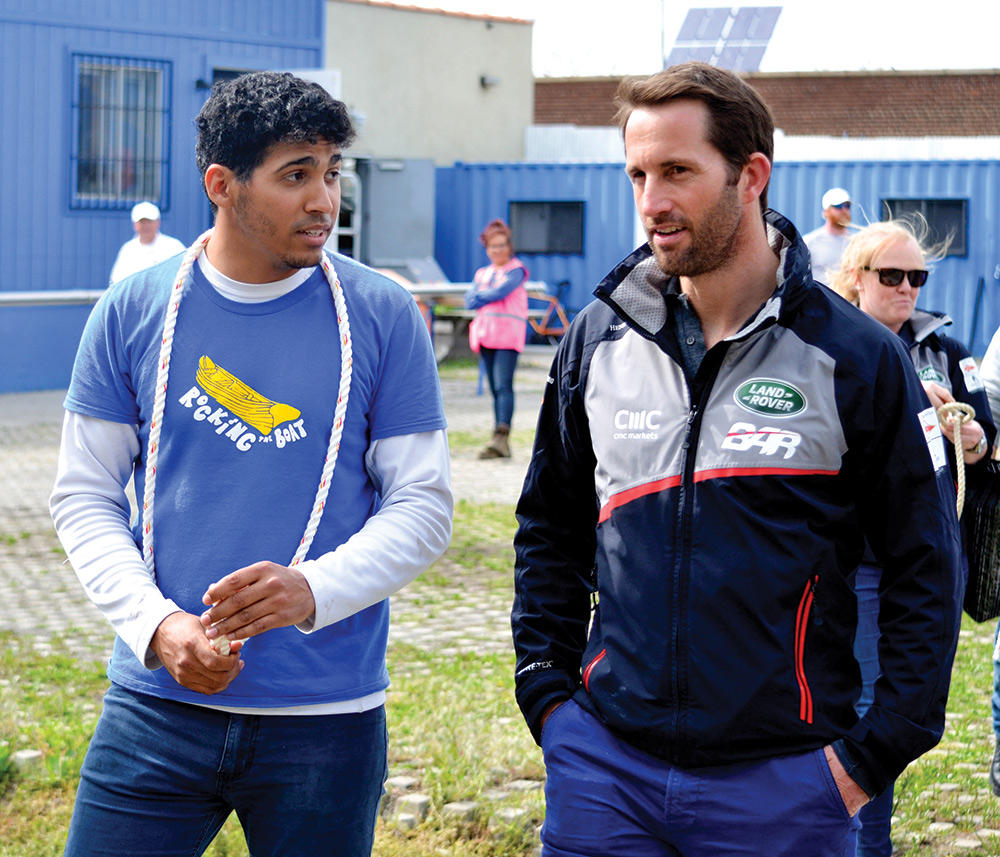 Duran has a chat with Sir Ben Ainslie, head of the LandRover BAR America’s Cup team.

“Honestly, I thought it would be better than it was,” he said. “In the DR, we had a house with a yard, and the air was much cleaner. In the Bronx, we were in a little apartment. It was tough. But I could get a better education here, and I knew that’s where opportunity would come from.”

Duran was a motivated straight-A student, graduating at the top of his eighth-grade class, despite struggling to learn English.

“I was doing pretty good,” he said quietly.

That all changed one night when, walking home alone, he was stopped by police and accused of a crime he said he didn’t commit. He spent the next five years fighting his case.

“I didn’t have a lawyer, but then I found a nice lady who defends activists,” Duran said. “She was the only one who believed me, and she told me, you have to prove to them that you’re not this person.”

To do that, the teenager would have to focus on community service and extracurricular activities. One of his teachers recommended Rocking the Boat. 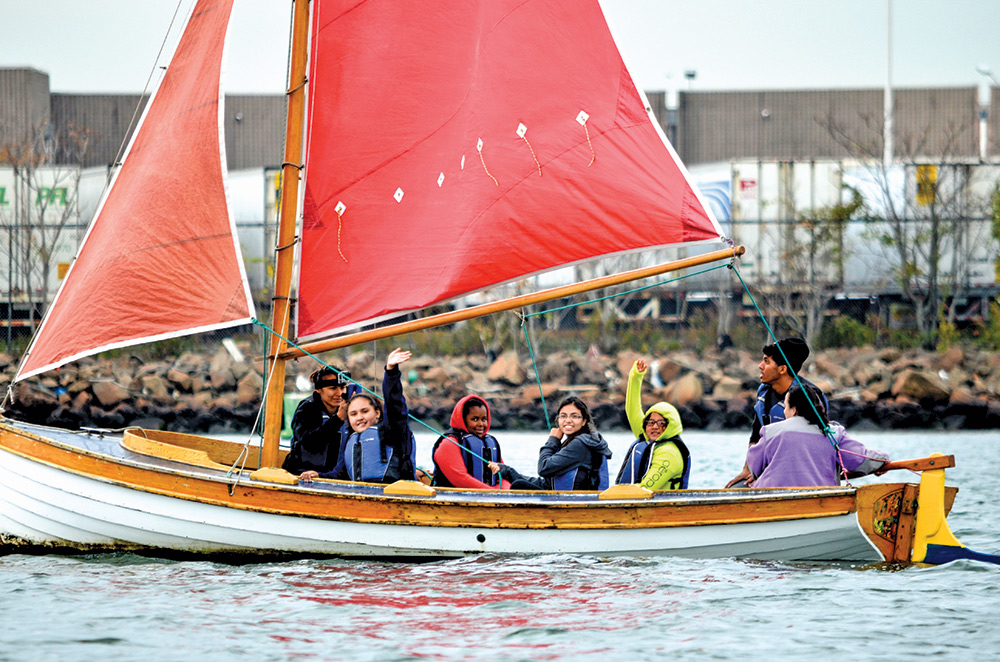 Carlos Duran leads a classroom session at Rocking the Boat.
At the time, Rocking the Boat only had boatbuilding and environmental science programs in place. Duran joined the latter and began testing water, learning about estuaries and examining local plants. The experience opened his eyes.

“I saw all of these kids who looked like me and talked like me,” he remembered. “They were from the same neighborhoods, and they were building boats and cleaning up the river. I didn’t even know the Bronx River existed before that! I never thought all of this could be happening here.”

The experience kindled an interest in environmental science in the teen who, until then, had wanted to be an architect. He also found the support system he so desperately needed.

“My grades had dropped dramatically,” Duran said. “I was just so confused by what was happening to me. I had always been law-abiding, and I was just a kid. It was a rough time. At Rocking the Boat, I had teachers who understood how I felt, and who helped me deal with my situation. And I could relate to them.”

Not only do Rocking the Boat’s program directors understand and accept the issues affecting their students, they know they have to be more than teachers. They also need to serve as mentors, advisors and guides.

The majority of Rocking the Boat’s students hail from the Hunts Point section of the South Bronx, which sits in the poorest Congressional District in the nation and in the poorest zip code east of the Mississippi. Public schools here are overcrowded and underfunded, resulting in discouraged students and contributing to an alarmingly low on-time graduation rate of just 35 percent.

To provide the extra layer of support these kids need, Rocking the Boat also employs social workers to engage with students on every level, from their academic careers to their personal lives. As a result, for kids like Duran, Rocking the Boat feels like home.

“They gave me the support that my family could not give me,” Duran explained. “My mom worked all the time. I’d never even gone camping—my first time was with that program. There’s no question that Rocking the Boat improved the quality of my life.”

After graduating from high school in 2007, Duran went on to study environmental science at the college level. Fate, however, revealed other plans when Rocking the Boat built its first sailboat, a Connecticut River Drag Boat, a design originally built for the 19th century shad fishery.

“The first time on the water, I was scared as heck,” Duran said, laughing. “I couldn’t swim. When the boat rocked, I hung onto the gunwale for dear life, and when it heeled, I was sure the boat was flipping over. But it was exciting, and I thought it was just amazing that you could go anywhere with… well, a blanket! Once I got accustomed to it, I loved it.”

He signed up for a 10-day expedition aboard a steel-hull, square-rigged tall ship from New London, Connecticut, to Boothbay Harbor, Maine. It was life-changing, and Duran had just one word for his first trip on open ocean.

“It was marvelous,” he said. “And all these people, it was their career to do this! I’d never thought of that, the idea that this could be me. And I realized I wanted to sail. This is what I wanted to do.”

He applied for a job with the Hudson River Sloop Clearwater organization, hoping to be a deckhand. He didn’t get it due to lack of sailing experience; he did, however, get a position as an education intern. His responsibilities included teaching passengers and students the history of the Hudson Valley, the biology of the river, and how to hoist sails and tie knots.

“I learned how to be a good teacher,” he said simply.

The next semester, he got the deckhand job. After that, he became bosun.

“I was determined to be a captain one day,” Duran said. “The only problem was maintenance. I hated that, and I skipped maintenance days all the time. But I learned that to be a captain, you need to love the boat as much as you love to sail. A good captain takes care of his ship, and after that, I never missed a single maintenance day.”

Duran spent five days a week on the ship. The other two days, he worked as an apprentice with Brennan Boatbuilding in Ossining, New York.

“I had a lot of sleepless nights, but I’m glad I did it,” Duran reflected. “I learned so much.”

He went on to serve as second mate and then chief mate aboard the Hudson River Sloop Clearwater, and he continued helping out at Rocking the Boat whenever he could. By this time, the staff was considering a new sailing program. Adam Green, founder and executive director, told Duran he wanted him on the team.

“I said I’d love to, because if it weren’t for Rocking the Boat, I wouldn’t be who I am today,” Duran said. “The problem was, I knew how to rig and maintain boats, and how to teach sailing, but all on tall ships.”

He spent the next year working on certifications for keelboat and small-boat sailing, as well as for powerboat operation. John Petrillo, Rocking the Boat’s sailing program director, took Duran under his wing.

“He’s the most wonderful teacher I’ve ever known,” Duran said. “I learned a great deal from him.”

In the sailing program, Petrillo was responsible for job skills apprentices, while Duran took on new students. He observed that the kids coming into the program were exactly like he was as a teenager.

“They’re scared of the water, and they’re intimidated, yet they’re in awe of the opportunities they’re facing,” he said. “And, they’re amazed at being told they can do these things. Here, they don’t have to traverse all the barriers they might face in other programs. They feel at home here, and I remind myself of that every day. These kids are all from ‘down the block,’ and this is a safe place for them.”

As they say at Rocking the Boat, kids don’t just build boats. Boats build kids. And Duran is a perfect example of the organization’s commitment to building strong, able, healthy individuals—and to providing ongoing opportunities.

“This isn’t a short-term engagement program,” Duran explained. “It’s long-term, and that’s true for all students and alumni. When I think about what I’m doing, in terms of my goals and my happiness, I’m providing opportunities to those who need it the most. What better way to give back?”