Home . Articles . News . Sailors Among Us . Teaching sailing one vet at a time

Teaching sailing one vet at a time

As the American Sailing Association’s affiliate representative, Elbert “Ash” Ashbaugh sees a lot of sailing school applications come across his desk. Many are from schools that have been successfully operating for awhile, complete with professional offices, insurance and the right boats for teaching; he might be able to get their applications approved in just a week.

More often, a piece of the puzzle is missing, but Ashbaugh can walk them through the vetting and application processes. Their certifications might take about a month or so. 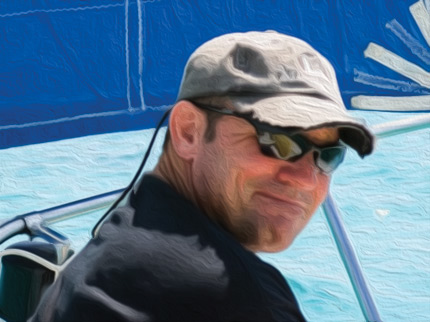 Joe Mastrangelo has made it his life’s work to teach veterans how to sail.

Then there are schools that apply from areas already saturated with ASA schools, and those who apply with a boat, a vision and little else. Some of those applications might be denied, that is unless there is something special about them.

Like one application from South Florida, from a very special man named Joe.

Joe Mastrangelo is that rare bird known as a Florida native. Born and raised in Miami, he grew up scuba diving, spearfishing and sailing the waters of the Florida Keys. The cruising bug bit hard when he crewed aboard a 45-foot ketch for a month, sailing to the Exumas, but he put his sailing life on hold when he fulfilled his lifelong desire to become a U.S. Navy SEAL.

Mastrangelo served with his SEAL team from 1996 to 2004, then pursued contracting for a variety of government agencies all over the world. In 2009, he was in the Gulf of Aden, where pirates were wreaking havoc along the Somali coast, and where a twist of fate awaited.

“I went to a friend’s 65-foot ketch for steaks and beer, and that was it,”
Mastrangelo remembered. “That set the hook. I started searching for my own boat.

“The thing was, I didn’t really know how to sail that well. I had my 100-ton Master Captain’s License for dive boats, but that’s not the same.”

One day, Mastrangelo came across a 41-foot Morgan Out Island sloop, and he knew it was the boat for him. He named her Anjin San, from James Clavell’s 1975 novel Shōgun.

“I jumped in head first, almost sight unseen,” he said. “She had great bones, but I had to put thousands of hours into fully restoring her. I was a slave to that ship, although I didn’t know it then. She was a labor of love.”

Mastrangelo cruised and lived aboard Anjin San whenever he wasn’t contracting, but he knew his career was tiring him out. He wanted to find a different life path, and his sailboat seemed to be pointing the way. 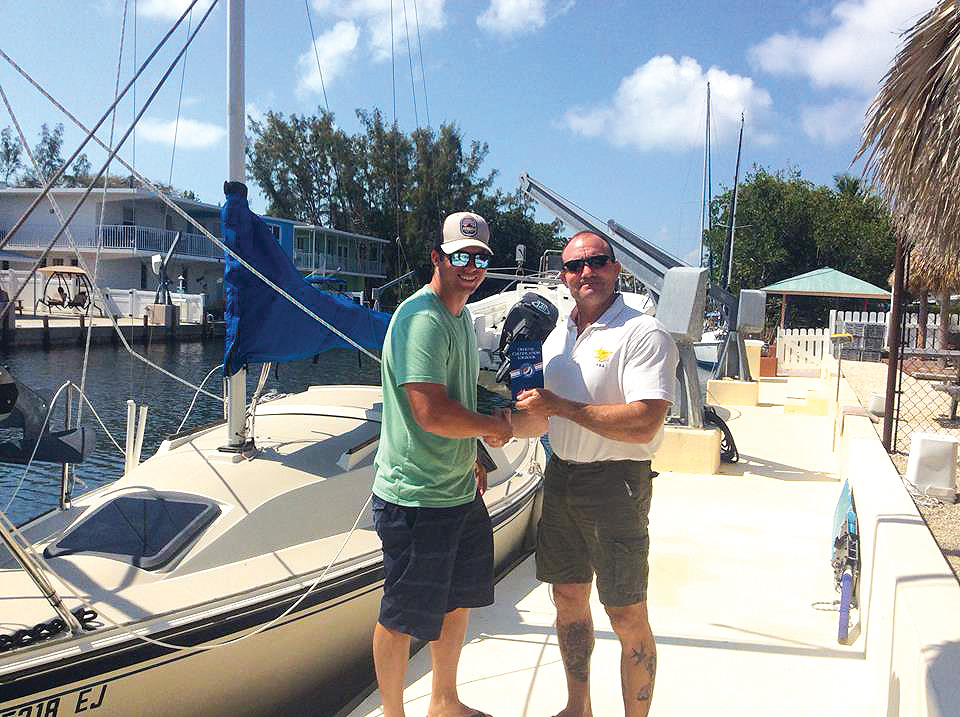 Mastrangelo poses with a graduate of his ASA school, a practice he follows with each student.

“You can only contract for so long,” he explained. “I’d been there, seen that, done it. I’m a water man, and I thought, what better way to decompress after service than sailing? I mean, human beings are mostly water. When you’re on the water on a boat, even at the pier, there’s an energy that soothes the mind. You also can feel the strength of the ocean. That’s the balance of the water, and you can take it to the level you want for what you’re seeking, whether that’s in a Bahamian anchorage or in the Roaring Forties.”

Pondering this in his hotel room in 2015, Mastrangelo began looking into ASA’s sailing courses. Realizing he could take them near his Florida home, he jumped in, working through ASA 101 to 105.

“They were difficult, like the U.S. Coast Guard’s captain’s test,” he said. “But I passed! Then I thought, now what?”

Mastrangelo knew he wanted to teach, and as a returning veteran himself, he decided he wanted to support others. He incorporated a new business, the Veteran Sailing Association, and applied for nonprofit status so he could seek donations. Although his new school would serve both veterans and nonveterans, the nonprofit would provide specific funding for vets to participate.

He also wanted ASA certification, so he reached out to Ashbaugh at ASA headquarters in Los Angeles.

“When Joe contacted us and said he wanted a school in the Florida Keys, we went, oh boy,” Ashbaugh said. “The Keys were so crowded with ASA schools.”

Adding another school would be difficult, but Ashbaugh, a veteran himself, and the ASA team wanted to help. The association has a history of working with veterans’ groups, embracing the notion that sailing is a meaningful and healing pursuit, particularly for those returning from deployment.

“It’s a good thing for the whole family, really,” Ashbaugh said. “Learning how to sail is different from military experience, different from the rest of regular life. You’re cooperating, learning new skills together and sharing that sense of accomplishment in an isolated and safe way. And it’s all amplified when you’re in the process of getting back to ‘normal.’ We believed Joe needed this school, and we believed it would do well, but we had to handle this differently. We needed to talk to the other schools.”

Then something remarkable happened. The established ASA schools in the area, which understandably could have viewed the new school as a competitor, sent letters to endorse Mastrangelo’s initiative.

“The letters said, ‘We think it would be great,’” Ashbaugh said. “The people around Joe believed in him and endorsed him. So we attached all those letters to his application, and we got it approved.

“We bent things a little,” he acknowledged. “This was a lot of time and effort for a one-boat school, but we believed he needed his school and that it would do well.”

Today, the Veteran Sailing Association accommodates approximately 80 students per year, both veterans and nonveterans, offering ASA 101-Basic Keelboat Sailing on Dutch Treat, a 22-foot O’Day keelboat, and ASA 103-Basic Coastal Cruising and ASA 104-Bareboat Chartering on the captain’s beloved Anjin San. Nonprofit funding supports veterans across Florida and the Gulf Coast, and nonvet students are coming to the Tavernier-based school from as far away as Colorado and California.

For Mastrangelo, supporting his fellow servicemen and women remains the driving force behind all he does.

“Doing my part to help these guys, it’s on par with becoming a SEAL in terms of how rewarding it feels,” he said. “Eventually I want to serve law enforcement officers and first responders as well, but right now my priority is the combat vets, because they have such high suicide rates. They’ve experienced IEDs, they’ve lost comrades, they have ex-wives and divorce papers. I can relate, but I let them know it’s in their wake, and here’s what they can do now.”

Mastrangelo runs a tight ship during his courses, and his students work hard to achieve each certification. As he colorfully observed, there is no BS at his school.

“You’ll achieve that goal, but you may have to put in extra effort and time,” he explained. “You’re going to earn it. This isn’t turnkey. The ocean is unbiased and unforgiving; you screw up, you’re gonna pay. It’s critical to have this mindset, because I don’t want these guys gun-decking it. When they’re done here, they can charter a boat anywhere. They know how to sail.”

The vets understand Mastrangelo’s approach. As he observed, it’s a big deal to develop this unique specialty and sail alongside a former Navy SEAL who’s been to Iraq and Afghanistan, someone who knows what it’s like to work in a combat zone. Someone who gets it.

According to Mastrangelo, learning to sail proves to be a sort of psychological bridge from the past to the present, and to what could be in the future.

“Sailing is the last freedom we have on this planet,” he noted. “I sail a lot in winter, when you’ve got solid 20- to 25-knot winds. These guys—when we’re reefed and sailing close-hauled, aboard a boat that’s balanced and sailing well—they’re just beaming. Then, with the keelboard up, we go into these anchorages where they have lunch with the snowy pelicans… you can see how it disconnects and decompresses them. And by graduation day? They’re just floored.”

Veteran Sailing Association has graduated 30 vets to date, and according to Ashbaugh, the feedback from Mastrangelo’s students has been nothing but positive.

“Everyone has good things to say,” he reported. “We’re very happy he has a school and is well thought of.”

Mastrangelo said he has no immediate plans to expand the school’s operations. Although he admitted he’d like to reach out to law enforcement officers and first responders at some point, his focus right now is simple: one vet at a time.

“I’m not interested in growing it,” he said. “I’d lose the intimacy, the relationships, the uniqueness of it. I enjoy doing everything myself, and I also like being 100% transparent with donors. I put every graduate on Facebook, so people can see how their contribution made a difference.

“This is a noble endeavor, or I wouldn’t be doing it.”