A family raised on the water preaches that life is short; go sailing

As we age, we’re able to look back and see the little twists of fate that had massive reverberations in our lives. Mary Orme Ellis knows this better than most. When she was a 19-year-old college student in Milwaukee, Wisconsin, she started dating a young man with a sailboat, and her life was forever changed.

The young man owned a 25-foot Coronado that he sailed on Wisconsin’s Lake Winnebago. He was, Mary remembered, exceedingly passionate about it.

“He started working on the boat in the spring, and all I could think was, this better be worth it,” she said.

Mary grew up in Milwaukee, one of four children in a family that wasn’t attuned to the water. For her, that one intense summer changed everything. “I became transformed,” she said. “Maybe I was a sailor in another life. We sailed every weekend in June, July and August. Then I met a guy with a bigger boat, and we sailed out of Milwaukee the next summer.”

Mary finished school at age 24, armed with a business degree. Although she had a new job as a secretary, she couldn’t ignore the lure of the sea. She wanted to go sailing and was surprised when support came from a surprising quarter.

“My boss had chartered in the Virgin Islands, and he told me I had to go to the sailors’ capital of the world,” she said. “He gave me six months’ leave.”

That was in 1979. Mary bought a one-way ticket to the U.S. Virgin Islands, boarded a plane with two duffel bags, and began a six-month journey that would end up lasting three and a half years.

She started in Charlotte Amalie on St. Thomas, where it was fairly easy to pick up crew jobs. She moved onto the British Virgin Islands when she met a Tortola-based skipper with an 84-foot ketch.  He hired her to be the vessel’s cook, responsible for feeding six to eight guests.

After the owner was killed in a 1981 dinghy accident, Mary moved onto a little boat in Road Town. She was living there, at the Village Cay Marina, when she met the folks at The Moorings. A new job opportunity dawned.

“They sent me to New Orleans for an interview, which was their headquarters until they moved to Clearwater, Florida, in 1984,” she said. “I spent 15 years with The Moorings in various capacities (in the BVI and Florida).”

Along the way, she met a fellow sailor named John Orme, who had sailed from his home in Cape Town, South Africa, to Tortola. He participated in the iconic Cape 2 Rio Yacht Race three times and he worked as a charter captain. They married and became parents to Tanya, born in 1985, and Samantha, who came along in 1987.

“Sailing goes back many generations on John’s side, and he introduced both girls to sailing,” Mary said. 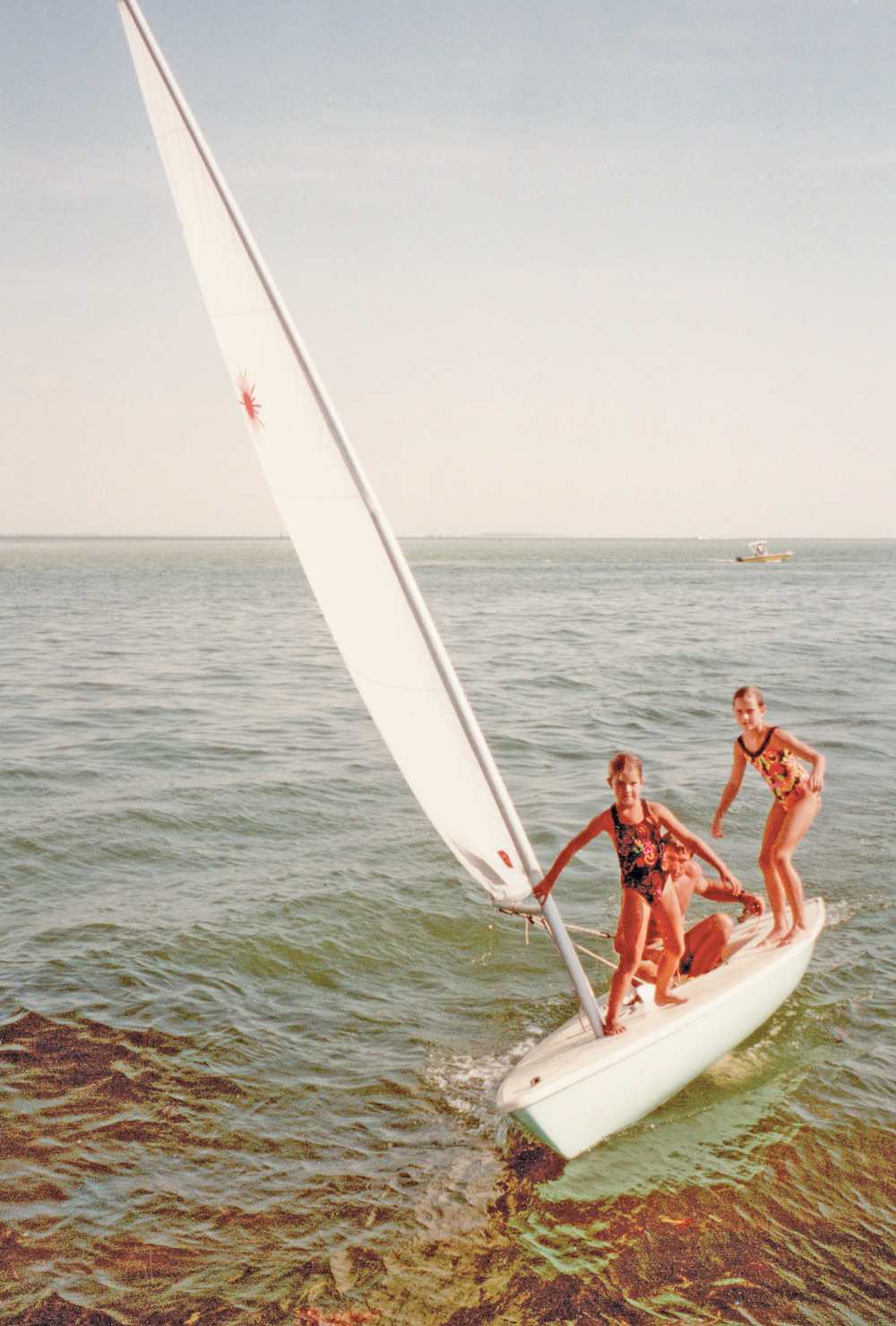 The Orme sisters were raised on and around the water, showing off their skills as girls on a Laser with their dad.

The family, which had settled in Tampa Bay, Florida, started chartering together when the girls were in diapers. With The Moorings, they could charter a boat whenever they wanted, provided they covered airfare and expenses. Over the years, they made many happy memories in the BVI, and cruised the Eastern Caribbean islands as far as Grenada.

After the Ormes’ marriage ended in the early 1990s, the newly single mother had to make ends meet as a yacht broker. Business was good during the tech-boom years, but boats stopped selling in the wake of 9/11, and commissions dried up.

Fortunately, Mary found a new calling, and a new life partner. While she was working for The Moorings, she met Creative Director David Ellis. The duo, who enjoyed beer can racing together out of St. Petersburg, married in 2000 and, after taking a course in copywriting, Mary joined her husband at his business, Affinity Marketing & Communications.

The family continued to spend time on the water together, enjoying the charter experience without “the headaches of ownership,” as Mary put it. Her girls remained enthusiastic participants, even as teenagers.

“They were always asking, ‘When can we go?’” she said. “Sometimes they’d bring a friend, but they always loved travel and sailing. In a way, we become models of our parents without realizing it.”

The teens also spent time on the water with their father, who built a large catamaran to sail out of  Tarpon Springs.

“The girls had so much sea time, they developed great sea legs,” Mary said. “They learned to handle any size boat.”

At 18, Tanya took off for Costa Rica with friends, and as a college student, she spent time in Australia and New Zealand.

At the time, the 1960 reconstruction of HMS Bounty was berthed in St. Petersburg, and the owners were seeking crew who weren’t afraid of heights and were willing to learn. Tanya took on the job of deckhand and eventually worked her way to rigging.

“She wasn’t afraid to be up there, handling all those sails,” Mary said. Tanya Orme took to the rigging of Bounty without hesitation.

Aboard Bounty, Tanya sailed on a six-month passage to the Bahamas, Central America, the Panama Canal, the U.S. West Coast and Canada. The crew participated in tall ship events, races, festivals and meet-ups along the way. When the ship returned to San Diego, Tanya jumped off and headed for Tijuana, Baja California. From there, she and a friend embarked on a backpacking-and-hitch-hiking adventure across Mexico, which Tanya documented in her extensive journals.

“She traveled on a pauper’s per diem, but she made her money last, and she turned every adventure into a life lesson,” Mary said. “She was fiercely unconventional. She just rolled with everything, and somehow, she also found time to paint. Hundreds and hundreds of paintings.”

Tanya finally came home for Thanksgiving in 2008, and then she took a job as cook aboard A.J. Meerwald at New Jersey’s Bayshore Center at Bivalve. She was living there when, on June 21, 2009, she was killed in a car accident. She was 24 years old.

Her sister, Samantha, was backpacking Europe with a friend when she got the news. She immediately booked a flight back to the States.

“I didn’t know how the rest of college would go down for her,” Mary said. “When you’re in shock and can’t even think straight, how do you study and do homework? But she’s so smart. She did it.”

Samantha graduated with honors from Florida State University with an industrial engineering degree. Although she would go on to use that degree in the industrial, solar, environmental, digital and financial arenas, she first chose to dive into her own adventures at sea.

“I saw a link about a superyacht crew application, and I shared it with her,” Mary said. “She knew how to crew, and she knew big boats. So she applied, she made the final cut, and she got hired.”

The application was for Bravo’s new reality series “Below Deck.” Samantha appeared as a cast member, working aboard the 164-foot yacht Cuor di Leone (renamed Honor for the show). The 11-episode first season aired in summer 2013. 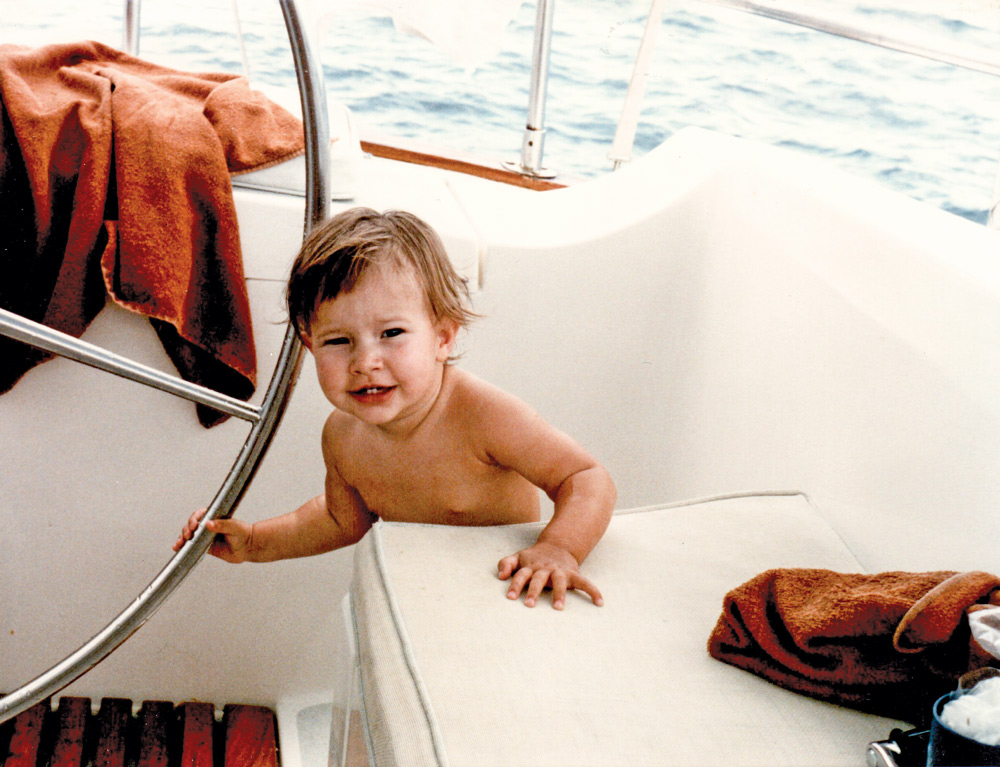 “We saved every episode,” Mary said. “The show actually had a lot of reality in it. Sami is outgoing and gregarious, she was voted ‘Most Memorable’ in high school, and she isn’t one to take authority well. She questions everything.”

Samantha left the show after the first season and moved to Los Angeles, where she worked for roughly three years. She and a high school friend toured North America for a year, and then she moved back to Florida.

These days, Mary continues to work with her husband at their marketing firm. And they continue to enjoy chartering.

“We bareboat charter somewhere in the Eastern Caribbean every chance we get,” Mary said. “Usually, a friend or family member will suggest going and invite us along to captain and cook. Well, that’s a no- brainer!”

Samantha lives and works nearby, and she continues to enjoy sailing on her father’s 70-foot catamaran Rena. And elder daughter Tanya’s seafaring and adventuring spirit lives on, thanks to the creation of a book called Non-Local Flow: Good Chi, the Sea and Me.

Producing this book, which shares Tanya’s life journey through her art and writing, was a labor-of-love mission for her mother. Mary dedicated a full year to compiling and editing the project, with the help of her husband and their colleague Michael O’Keene. It was published in 2010.

“I spent every free moment on it,” she said. “I didn’t want Tanya to be forgotten. Even long after I’m gone, I want people to say, ‘Who is this remarkable young woman?’”

Tanya and Samantha grew up listening to the sea stories of their parents, traveling to other countries, experiencing other cultures, and reveling in every moment under sail. Mary said she believes this transformed them and deeply influenced the adult lives they would create.

“In their childhoods, they saw an unconventional America,” she said. “They were very blessed that way. They understood the importance of travel, especially to Third World countries. They had opportunities to see life on the other side. One of Tanya Orme’s paintings, which is included in a book of Tanya’s art and writings called Non-Local Flow, depicts the artist’s love of sailing.

“They also developed their creativity and imagination,” she added. “We encouraged them to interact with real people, and engage with real things rather than the nonessential stuff. I suppose all of us are like-minded — travelers, adventurers and sailors who know that life is short, so get out there, and go sailing.”