He had big plans: sail the southeast coast of Nova Scotia, cross the Strait of Canso, cruise the northwest coast of Cape Breton Island, cross the Gulf of St. Lawrence to Newfoundland, and then head for Baffin Island. He figured he could manage 60-some miles per day, given the fact that he would be skippering a heavy and somewhat undercanvassed motorsailer—and, in the north, the wind tends to be not enough or too much, and always from the wrong direction.

His sights were firmly set on the Arctic.

“Standing in my paint-spattered cargo pants, hacked off at the knees, I feel the beginnings of a new life taking shape,” he wrote. “I’m not sure if becoming one more aging boat bum qualifies as a ‘plan,’ but it certainly sounds like fun.”

It wasn’t always easy, however. In May, Souders was ready to cast off the docklines for the first segment of the big cruise, and he confided in his journal that the enormity of the venture was weighing on him.

“I’ve never contemplated a trip of this length, this ambition,” he wrote. “And today is the day it begins. I realized that all the hard work, the newly learned skills, the endless outflow of money… all of that was simply prologue. Now I need to get to work. But sweet Jesus, I’d like to face this day with more than five hours’ sleep. I try to hide from it all, but there’s no avoiding it. Today is the day Ocean View goes in the water, the day I find out what she, and I, are made of.”

Ocean View sailed out of the harbor on a gray, quiet Saturday. Fifteen miles later, she entered the open ocean.

“The highest drama came when I left the protection of Shelburne Harbour for the first time, rounding the corner and finally dipping a toe into the big, bad Atlantic,” he wrote. “There was just enough swell to begin rolling the boat side to side. I know just enough to imagine the mainsail will act as a steadying sail, so scurried out to raise it. It took a while to remember to turn the boat up and into the wind, to take the pressure off.

“I tried to rush it, of course, and found myself in a tangle of lines. When I finally got the sail up, we had turned 180 degrees and were heading back the way we came, except even closer to the rocks and smashing surf this time. 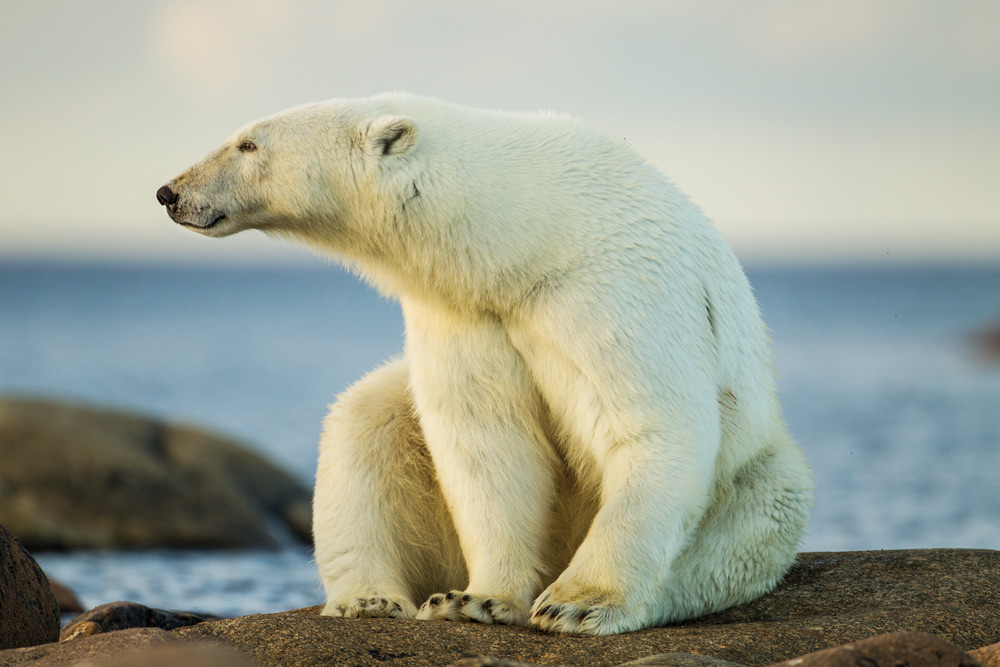 “The sail helped steady the boat, but it was still a rolling passage. The swell was only 3, maybe 5 feet, but enough to keep the boat in near constant motion. There was a time when it would have been enough to send me to my bunk and let someone else deal with it. Now, there is no one else. I felt a little queasy at times, anxious and mouth-sweaty at others. And it didn’t matter. No matter how crappy I feel, nobody is going to come along and take over the steering. So I just kept at it.”

Heavy, slow Ocean View was not designed to be purely a sailing vessel, so Souders found himself doing a lot of motoring. And with her shallow keel, she often felt like an old, temperamental friend.

Souders wrote, “Steering with one foot on the wheel, she certainly has a mind of her own when it comes to holding a course. Not unlike old C-Sick. A moment’s inattention, and we’re heading for the rocks, the Azores or Greenland. Anywhere but the 60-degree northeast course I’m trying to hold.”

Souders left Ocean View in Newfoundland so he could go home for a visit. Upon his return, he sailed on to Belle Island and along the coast of Labrador. He passed Nain, the northernmost settlement in the Canadian province of Newfoundland and Labrador—only the remote Torngat Mountains National Park and a few scattered summer fishing camps remained between him and Iqaluit, Baffin Island.

“It felt like stepping off the end of the earth,” he says. “I thought, I’m actually doing this “I had 800 miles of the Labrador coast on my charts, and I hit the last one. Then: the Arctic. I was getting farther and farther out over my skis, but I was so excited. The trip was coming together.”

Souders says he doesn’t know what made him check the engine compartment one day, but when he did, he was greeted by a mound of green-gray slime and a stream of water coming in.

“There was at least 6 inches of new water in the bilge before I even noticed it,” he wrote. “And I also discovered that I completely (expletive deleted) up the bilge pump’s plumbing. It’s perfectly designed to ensure that no water actually leaves the boat… and now I’m going up on deck to re-inflate the Zodiac, in case this thing blows a seal, and the bilge pumps can’t keep up, and Ocean View starts to go down.”

Souders slept with the light on, prepared to deal with the crisis if the shaft seal gave out in the middle of the night. And with daylight came preparations to return to civilization. The summer’s trip was over.

“It could be argued that taking your first boat trip, your shake-down cruise, in the form of a very expensive, ambitious solo voyage to the Arctic is the purest form of lunacy,” he wrote. “And at this juncture, you would get no argument from me. What the hell was I thinking?”

A hundred miles into his return trip, he stopped at the national park, where staff were able to help him stabilize Ocean View. He sailed her on to Corner Brook, Newfoundland, and took her out of the water; at press time, she is waiting for him there purposeful, conscious way of living.

“So much of our lives are vicarious these days,” he added. “We’re hypnotized by our screens, and that’s how we experience the world. I want to have these adventures myself.”

Although Souders remained on the West Coast in 2018, he bought a Gulf 32 and took her to Alaska in a “surprisingly undramatic trip.” Now he’s ready to tackle his Arctic dreams once again. For him, it is the promised land.

“This is the year,” he said. “I want to follow the trail of exploration and exploitation through the Arctic. I’ve read the history, and I’ve found all these scoundrels, misfits and lunatics. These are my people!”

And he says he feels genuine affection for his difficult old boat now, which he calls “his girl.”

“This boat has taught me a raft of lessons that are seemingly out of touch with our particular moment in history,” he wrote. “Self-reliance. Patience. Singleminded focus. A willingness to dirty my hands and bloody my knuckles and to try to fix things myself. And, other than the ‘opportunity costs,’ the spent money and time away from my so-called career, it’s been a good, good thing for me.”