This capable and versatile cruiser is a bargain 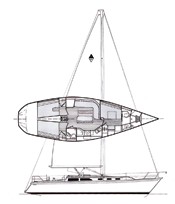 Catalina Yachts has always known the secret to success in the North American sailboat market: build comfortable boats that sail well, look nice and are affordable. The simple formula was developed when Catalina built primarily small boats, beginning with the now legendary Catalina 22 in 1970. Unlike other builders who abandoned their roots when they turned to producing larger boats, Catalina remained true to
its philosophy.

After expanding its range year after year, in 1989 chief designer Gerry Douglas and company President Frank Butler thought the timing was right to introduce a new 42-foot model. Not surprisingly, they were right, and 477 of the original Catalina 42s were sold before Douglas updated the design in 1995. Nearly 300 Catalina 42 MKIIs have been sold and the boat is still very much in production. That's another hallmark of Catalina Yachts, it keeps boats in production for years, adding value to both new and used models.

The Catalina 42 was one of the first American production boats to offer three private sleeping cabins. This was in response to the beamy European boats pouring into the U.S. market in the late 1980s and early 1990s. This article will focus primarily on the original Catalina 42, which not only met the European challenge when it was new, but continues to be a highly desirable cruiser on the used market. Prices range from less than $100,000 for an early boat to around $140,000 for a 1994 model. Expect to pay more than $200,000 for an almost new MKII boat.

First impressions
I confess, the 42 is one of my favorite Catalinas. It's a handsome boat. The bow is raked just enough to give it a clean entry and still maintain a relatively long LWL of 36 feet. There is enough of a forefoot to keep the bow from pounding, at least most of the time. The hull flares quickly but the wide, 13-foot, 10-inch beam is nicely absorbed into the overall flow of the boat. The beam is carried well aft, providing space for double aft cabins and a roomy cockpit, yet it doesn't seem excessive like many of today's boats. It actually tapers a bit at the transom. Good design demands a sense of subtlety and that's always been one of Douglas' best attributes.

The 42 is rigged as a sloop with slightly swept-back double spreaders. The working sail area is just under 800 square feet. The design displacement is 18,000 pounds, translating into a respectable SA/D of 18.5. However, everybody knows that used boats, and new ones too, especially cruisers, weigh more than advertised, limiting the usefulness of design ratios. It wouldn't surprise me if the Catalina 42 you're interested in buying tips the scale at well over 20,000 pounds when you haul it out for a survey. The 42 came with two keel arrangements. A 4-foot, 10-inch wing keel or a 6-foot fin keel. I prefer the deep keel because it tracks better.

Construction
The Catalina 42 is a well-built production boat. Several have made impressive bluewater voyages, although that wasn't the primary design ethos. The 42 was designed to be affordable and to appeal to a broad spectrum of sailors: daysailors, club racers, weekenders, and to a lesser extent, long-distance cruisers.

Are there more ruggedly built boats? Yes. Is the Catalina 42 built to sail around Cape Horn? No. Is it built to do what most sailors want it to? Absolutely. Would most 42 owners buy it again? Overwhelming so. That speaks volumes about the construction of the boat.

The hull is solid fiberglass, reinforced with a molded liner that incorporates the cabin sole and furniture facings. Liners are a mixed bag, they are an efficient way to build a boat, and when done well, they provide more than adequate structural support. On the downside, they depend on a secondary bonding and they limit access to the hull. Catalina has a long history with molded liners and there are few if any reports of problems. The deck is cored with balsa except in areas that support hardware where one-half inch plywood is used instead. This isn't the best method of backing up hardware. The hull and deck are joined on a flange and includes stainless steel fasteners and 3M 5200. Catalina has always used lead ballast. The interior finish work is nicely executed.

What to look for
Unlike other boats we often review, the Catalina 42 is relatively new. The oldest model afloat is just 18 years old. That's an interesting statement, and a testament to sailboats in general. A 1989 model is not really considered an old boat and that partially explains why it is so challenging to sell new boats. You can go out and buy a 1989 Catalina 42, a truly spacious and capable cruiser, for less than $100,000. Those same dollars translated into a new boat purchase barely cover a Catalina 309, a sprightly 30-footer.

For the most part the Catalina 42 has held up quite well over the years. Some specific items to inspect include the aluminum rubrail and vinyl sleeve that is undersized, and the rudder bearings. With the onset of the MKII, Catalina switched to vinylester resin, limiting osmotic blistering. Earlier models may have a few blisters, although Catalina's warranty covered most repairs. Also check the forward sections of the hull liner to make sure it is still well bonded to the hull and doesn't show signs of flexing or cracking. Age-related items that should be carefully inspected include the standing and running rigging. Be sure to examine the chainplates as well as the wire and terminal ends. Also, look carefully at the plumbing system, it may be time to update hoses and through-hull valves and this is a deceptively expensive project.

On deck
The Catalina 42 cockpit is spacious and well laid out. The boat is a pleasure to sail and to socialize aboard while dockside, and this is rarely the case. The seats are long enough to stretch out on. The 40-inch wheel is large enough to make steering enjoyable but still easy enough to climb around when going aft to the stern step. The helm seat opens to allow access to the molded stern step. I like this arrangement better than the twin wheels of the similar but beamier Catalina 400. The 42 was one of the first boats with the stern step feature and it's nicely incorporated into the lines. The primary winches are not easily reached from the helm and secondaries were not a popular option. Visibility is for the most part good, however, an extensive dodger and bimini arrangement can make it tough to see where you're going. Two deep lazerettes and two coaming hatches offer plenty of storage.

The traveler is forward of the companionway, with a midboom sheeting arrangement that really loads up the boom. The mainsheet is led aft to the starboard coachroof and it's tough to get much purchase when trimming. Of course the tradeoff is an uncluttered cockpit. The shrouds are inboard, allowing for relatively tight sheeting angles and easy mobility on deck. Cleats and deck hardware are adequate. The anchor windlass is located in the chain locker and the stemhead fitting is small but functional. The new MKIIs have an improved double roller arrangement.

Down below
The 42 was offered with two interior plans, either a two or three cabin arrangement. Both plans feature a large head and shower forward in lieu of a traditional V-berth. This is a much better use of space. Nobody really wants to sleep all the way forward anyway and by pushing the saloon farther aft it becomes more useful while underway. There's a small head aft for use while sailing. The forward cabin is a Pullman-style berth to port. Maybe this doesn't seem as friendly as the newer island berths offered on the latest versions of the 42 but it is very practical. Pullman berths are easily fitted with lee cloths for sleeping and are an efficient use of space.
The saloon in the popular three-cabin version features a nice L-shaped dinette to port with the galley opposite. This isn't the best place for cooking while underway. On starboard tack it is hard for the cook to find support and everything tends to fly off the counter, despite a decent sized fiddle. It's difficult just to open lockers without items falling. The nav station is aft to port and uses the settee for the seat. In the two-cabin model the galley is to port, aft of the dinette, and there is a settee and nav station to starboard. Both models have a small second head to starboard.

The three-cabin model features two double cabins aft. The cabins are, for the most part, more spacious than similarly styled European boats. Each contains a hanging locker and enough elbowroom to stand up and change clothes. The two-cabin model

features a good-sized aft cabin to starboard. There's plenty of storage with a hanging locker and shelves along the bunk. While the three-cabin model was popular with the original 42s, the two-cabin version became the interior of choice with the MKII.

Overall the interior is roomy, bright and airy. There are seven to eight opening ports, depending on the model year, and overhead hatches throughout. There is also a distinct lack of handholds, something that can be easily rectified.

Engine
The standard engine has always been a Yanmar diesel. Prior to 1991 it was the four-cylinder, 44-horsepower model. After 1991 the 4JHTE, a 50-horsepower model, became standard. Access to either engine is surprisingly good, and the stuffing box can be reached from a panel in the aft cabin. The fuel tankage of 39 gallons is a bit on the light side but these engines are incredibly fuel-efficient and the 42 hull is easily driven. Owners claim that the boat will move at 6-plus knots, at half throttle, burning all of a one-half gallon per hour. While this means that the realistic cruising range is around 400 miles, extended cruising will require additional fuel capacity. A three-bladed fixed prop was standard.

Underway
The Catalina 42 is not under-rigged, a design feature that I appreciate. It can hoist a lot of sail and move along smartly in light air. Owners talk of attaining 8 knots off the wind without surfing and 7 knots upwind. Throw a following sea into the equation and the 42 can really make miles on passage. The fin keel model is weatherly, and the polars indicated that with a 140-percent genoa the 42 should maintain 6-plus knots in a moderate breeze at 35 degrees apparent. The motion will be decent, although the 42 does pound in a seaway. At the same time the boat is moderately stiff and doesn't usually need the first reef until it's blowing close to 20 knots. The PHRF rating averages 105.

Conclusion
The Catalina 42 is a capable and versatile cruiser with a comfortable interior and a nice sailing hull shape. It is also a sound value on the used boat market. When you start looking seriously at what $100,000 buys, chances are the Catalina 42 will be up near the top of the list.