By Erin L. Schanen
Mark Wheeler knew that staying calm was key. That’s easier said than done when you’re in 65-degree Lake Michigan with a storm on the horizon, building seas and you’ve just watched the boat you fell off of sail away at 18 knots.

By Greta Schanen
More than 80,000 people packed downtown Auckland, New Zealand, in July to celebrate the triumphant return of the America’s Cup after a 17-year absence. Thunderstorms didn’t dampen spirits as Emirates Team New Zealand paraded down Queen’s Street, the Auld Mug held high, and onto a boat for a tour of the jam-packed Waitemata Harbour.

Don’t be afraid of the dark

By Elbert Ashbaugh
Sailing at night is challenging, rewarding and dermatologist approved. Gliding through the dark under the stars can be a surreal experience. And you don’t have to go very far from the harbor for the experience. It is a different world that requires new skills and awareness to be fully enjoyed.

A circuitous route to the sailing life

This Chicago man didn’t grow up sailing, but it became a passion he’s passing on to his family

By Heather Steinberger
Like a sailboat, life never moves in a straight line from the starting line to the finish. It also has a tendency to blast you with roaring winds, strange currents and a startling array of unexpected circumstances, which means you’ll learn a heck of a lot along the way—and very likely emerge stronger and wiser than before.

Instead of turning on the engine, discover the art and pleasure of coaxing a boat through a small breeze

By Brian Earl
Sailing in light air is a science and an art. The science comes from adjusting your sails and position of sail to get the maximum lift and momentum. The art is the patience and fortitude for you and your crew to remain still, quiet and aware while resisting the urge to reach for the start button on the “Iron Genny.” With some experimentation and focus, you’ll fine that it’s not difficult to keep the boat moving well in light air, and it can be surprisingly pleasurable sailing too.

By SAILING Magazine
For years sailors were mostly left to call on experience and instinct when it came to routing a passage. Today, onboard computing power relying on copious amounts of data can show sailors any route with any number of variables applied.

By SAILING Magazine
Rig tuning isn’t just about maximizing performance, although that’s a nice benefit to a properly tuned rig. At its most basic level, a tuned rig will make your sails more efficient, prevent damage and help you get more life out of your equipment.

By Heather Steinberger
Anyone who has grown up on the water knows the transformative power it has. It’s a classroom, a playground and a haven, a constantly evolving presence that can deliver whatever is needed, from job skills and life lessons to bonding, excitement and peace.

By Bob Pingel
Some of the best adventures happen on trailersailers. On what other kind of sailboat can you explore far-off inland lakes, wide rivers or obscure bits of estuaries all in the same weekend? In fact, one of the only drawbacks to being a trailersailor is that you’ve just doubled your maintenance requirements: not only do you have to take care of the boat, you must take care of the trailer, so that it will take care of you.

By Erin L. Schanen
There is a widely held belief among sailors that the secret to getting more people into the sport is to get them on the water. Rob James, owner of Kingdom Yachts Sailing Club, an American Sailing Association school in Atlanta, Georgia, thinks the key is to get them in a boat, but not necessarily one that’s on the water.

By Bob Pingel
Basics knots, like a bowline or Figure 8, are the foundation of sailboat knots and have been since the beginning of time. These knots are used to terminate control lines, prevent the loss of lines and perform other important tasks. Lesser known “fancy knots,” such as monkey’s fists or different braids, can be useful or just nice to have around from a decorative perspective. Fancy knotwork can be a lifelong pursuit, getting as complex as you like, but there are a few knots that are easy to learn and are still useful. And practicing these less-than-everyday knots can up your knot-tying game.
« Prev 910111213141516171819 Next » 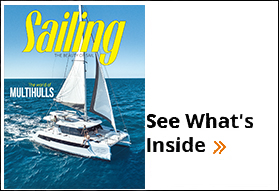